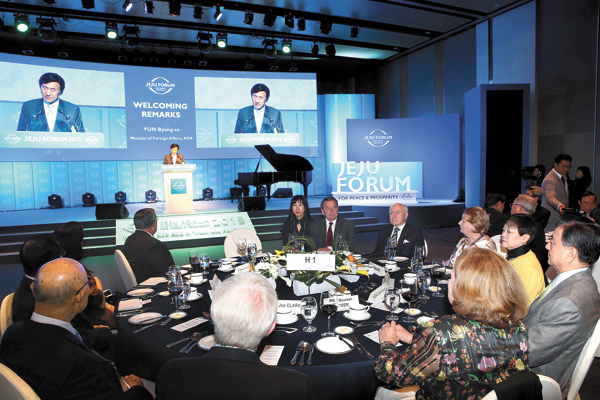 A welcome dinner for the 10th Jeju Forum was held at the Haevichi Hotel & Resort Jeju in Seogwipo on Wednesday. By Oh Jong-taek

Former Japanese Prime Minister Yasuo Fukuda urged a meeting between President Park Geun-hye and Prime Minister Shinzo Abe in order to solve the sensitive issues dividing Korea and Japan in an interview on the sidelines of the Jeju Forum for Peace and Prosperity on Wednesday.

“The leaders of Korea and Japan have to meet in order to resolve the ‘comfort women’ problem,” Fukuda said during an interview with the JoongAng Ilbo, Korea JoongAng Daily and JTBC, referring to the issue of women forced into sexual slavery by the Japanese military before and during World War II. “What sort of level that could be considered tangible progress on this problem will also be a topic of conversation in such a meeting.”

Fukuda, who served as the 91st prime minister of Japan from 2007 to 2009, was in Korea to attend the three-day 10th Jeju Forum at the Haevichi Hotel & Resort Jeju in Seogwipo that kicked off Wednesday.

“The Korean and Japanese leaders hold large responsibility in the bilateral problems between Japan and Korea,” he said. “It is a priority for the leaders of Japan and Korea to meet first.” 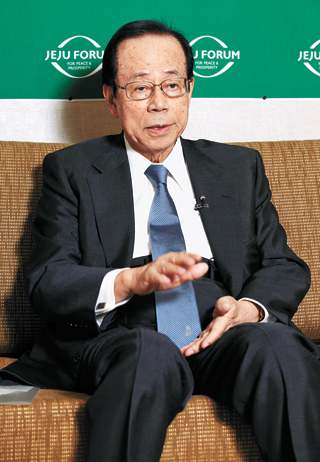 Park and Abe have yet to hold a bilateral summit because of disagreement over issues of history. Fukuda said it is priority for the leaders of the two countries “to have the mindset, will and determination to resolve bilateral relations,” adding, “And I believe that the two leaders have such a mindset.”

In regards to an expected statement by Abe to mark the 70th anniversary of the end of World War II in August, he said, “Prime Minister Abe has his own clear idea of what message he wants to relay. I look forward to it being something that all people will be able to accept.” He said he hoped it is a statement that Koreans can also identify with.

The Jeju Forum, which hold its opening ceremony Thursday and runs through Friday, brings together political leaders, scholars, business professionals, heads of international organizations and media to share ideas about peace and prosperity in East Asia.

Foreign Ministry officials from Seoul and Tokyo have been holding regular talks since April last year to try to resolve the Japanese military’s sex slave issue, euphemistically called comfort women, but Fukuda pointed out that “while opinions are exchanged between foreign affairs officials of both countries, it is the leaders’ thoughts that will be the deciding factor.”

“The two countries are democratic countries, and the sentiments of the people have to be reflected,” said Fukuda who also served as the 22nd president of the Liberal Democratic Party. “While the current situation is one where whenever an incident erupts, the people of each country are offended, this should pass as something momentary and should not determine the future.”

His father Takeo Fukuda served as prime minister from 1976 to 1978.

“The people of both countries should not be negligent in such a situation, and rather, cheer for the leaders [to meet and resolve the issues].”

About concerns in Seoul over Japan’s move to claim the right to so-called collective self-defense ? giving military aid to an ally that is attacked ? Fukuda said, “This is content that even the Japanese people have yet to comprehend fully. However, from what I understand, Japan is not trying to head into the direction of becoming a military state.”

He said that the Japan Self-Defense Forces’ role will be expanding, but “that doesn’t mean Japan wants to wage war.”

He said issues such as the comfort women could be dealt with immediately, while territorial issues that Japan and Korea face, namely the Dokdo islets in the East Sea, might take some more time.

Some 4,000 people from 58 countries will attend the event, which this year celebrates its 10th forum with the theme “Towards a New Asia of Trust and Harmony.”

The forum is co-hosted by the Jeju Special Self-Governing Province, the International Peace Foundation, the East Asia Foundation and the JoongAng Ilbo.

Former Prime Minister Fukuda conveyed he wants to improve strained relations between Korea and Japan though his participation in the forum.

In an interview with the Mainichi Shimbun, Fukuda said that without a reflective and deliberative engagement with history, real progress cannot be made toward peaceful coexistence in East Asia.

On the sidelines of the Jeju Forum on its inaugural day, the Ministry of Foreign Affairs held the 13th East Asia Forum for the first time, to bolster regional cooperation against non-traditional security threats.

The East Asia Forum (EAF), with the theme of “Prosperous East Asia through Non-Traditional Security Cooperation,” includes members of Asean and Korea, China and Japan. It functions as a research body fostering community-building in East Asia.

Following the 12th EAF in Brunei last year, Korea was selected as the host country for this 13th meeting.

Kim Hong-kyun, the Korea Foreign Ministry’s Deputy Minister for Political Affairs, said that the forum was “launched under the vision of building an East Asia community.”

“Since then, it has served as a platform for regional integration, bringing together individuals from government, business and academic circles to enable peace and prosperity in the region.”

Holding the EAF back-to-back with the 10th Jeju Forum is considered a milestone in the history of the forum.