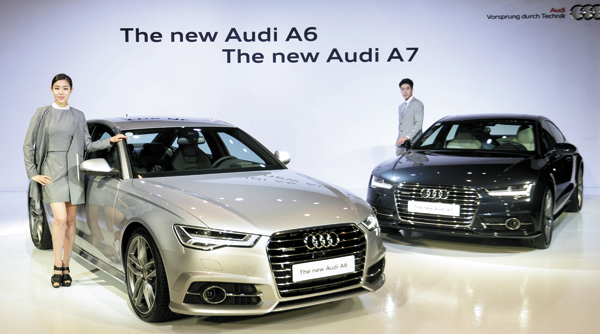 Audi’s new A6 and A7 are introduced at the Banyan Tree Club and Spa in downtown Seoul Thursday. [NEWSIS]

Audi is introducing a package of mid-size sedans and coupes as part of its ambition to become the leading imported car in Korea.

At a launch event held at the Banyan Tree Club and Spa in central Seoul Thursday, Audi Korea unveiled upgraded versions of the company’s best-selling sedan A6 and the four-door coupe A7. The company will also start selling three high-performance models: the new S6, S7 and RS 7.

The Audi A6 was originally introduced as the Audi 100 in 1968 and the name was changed to A6 in 1994. The new A6 is a face-lifted version of the seventh-generation model introduced in 2011.

The A6 35 TDI developed with a four-cylinder TDI diesel engine offers 190 horsepower, 40.8 kilogram-meters (295 foot-pounds) of torque and fuel efficiency of 14.9 kilometers per liter (35 miles per gallon).

The A6 55 TDI Quattro, the highest model developed with a V6 TDI diesel 2-stage Biturbo charger, offers 320 horsepower. The high-performance S6 that shows off 450 horsepower and goes from zero to 100 kilometers per hour (62 miles per hour) in 4.5 seconds. The body length of the new A6 grew 18 millimeters to 4.9 meters (16.2 feet) and the width is 1.9 meters. LED headlights and next-generation multimedia interface navigation, as well as soundproof glass, have been added to all trims of the A6 as basic options.

“Audi will introduce 11 new models in 2015, and these two models [the A6 and A7] are the most important ones for the company in sales,” said Audi Korea CEO Johannes Thammer during the event. “The sales of A6 and A7 in Korea were fourth and fifth in the global market. In order to meet consumers’ expectations, we have added premium options to these new models.”

Thammer has told the Korean media that the company aims to sell 30,000 cars this year, about 10 percent more than last year, and the A6 is supposed to be leading the sales. The company sold 32,631 units of the old A6 from August 2011 through April. The starting price for the A6 is 62.5 million won ($57,125) including value-added tax.

A new four-door coupe A7 was unveiled as well. It is offered in six models, two developed with TDI diesel engines and four built with TFSI gasoline engines. The S7, a high-performance version of the A7, is built with 4.0 TFSI gasoline engine developed with V8 twin turbo charger. It has 450 horsepower. The RS 7, the ultra-high performance variant of the A7, reaches from zero to 100 kilometers per hour in 3.9 seconds and boasts 560 horsepower.

Audi Korea isn’t just focusing on selling cars. Considering that many Korean customers aren’t satisfied with foreign brands’ customer service, mostly caused by longer repair times and higher costs than for domestic cars, the company said it will open 15 additional service centers to operate a total of 40 nationwide by the end of the year, adding . It will build 158 additional work bays to operate a total of 459.

“One of our goals is to strengthen our position as a leading foreign brand in Korea,” said a spokesman of Audi Korea. “In order to accomplish that goal we will expand our after-sale service network and to introduce new models this year. Sales last year increased by 37.9 percent from a year earlier and we expect to improve even more this year.”