Samsung introduces a standard for IoT

Samsung introduces a standard for IoT 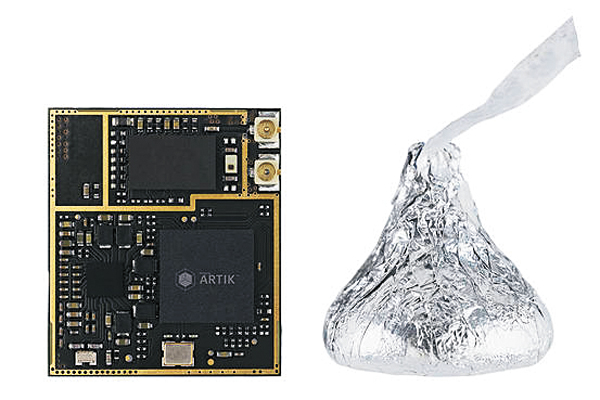 Samsung Electronics’ Artik is the size of a Kisses chocolate. Provided by company

Bracing for the Internet of Things era, in which almost everything will be connected via the Internet, Samsung Electronics has launched a trio of hardware development packages to make it easier for startups and tech enthusiasts to build connected gadgets and wearables.

Samsung Electronics rolled out a platform called Artik at the Internet of Things World conference in San Francisco last week aimed at providing companies with the sensors, processors and tools needed to make Internet-connected devices.

Artik 1 is designed to be used for small, low-power devices. The next two versions will be used for devices that perform more complex tasks. Artik 5, for example, incorporates a 1 GHz dual-core processor and on-board DRAM and flash memory to power bigger devices that require more power. Artik 10 is equipped with an eight-core processor, full 1080p video encoding and decoding functions for devices to be used on home servers and in commercial or industrial settings.

Artik 1 will cost “less than $10” for every device it is used on, Sohn Young, chief strategy officer at Samsung Electronic, said at the conference. 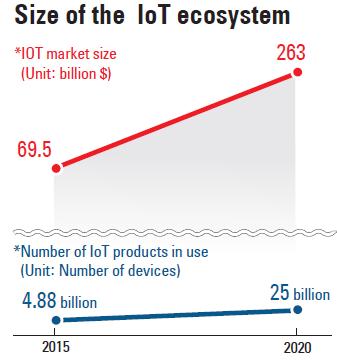 Despite overwhelming hype around the concept of the Internet of Things, industry doesn’t have actual platforms or hardware for manufacturers to use to connect their devices with other devices.

“There have been a lot of discussions about IoT,” said a source at Samsung Electronics who declined to be identified. “But to grow a market, we need to make core modules that will be used to make Internet-enabled devices available at affordable costs. An Artik module that costs less than $10 will serve as a catalyst to spur growth of the IoT market.”

Samsung is making a big bet on the Internet of Things.

The company declared that it considers IoT a future growth engine. It says that all electronic devices it manufactures will be connected to the Internet by 2020.

In August, Samsung acquired SmartThings, a smart-home service developer based in the United States.

The acquisition, which was reported to be for $200 million, is seen as a key to breaking into the emerging IoT sector.

SmartThings was established in 2012 by Alex Hawkinson, a leading expert in IoT. The company specialized in providing technologies to monitor, control and automate home devices remotely through a mobile application. Its platform connects more than 1,000 devices and 8,000 apps.

On the same day that Artik was announced, SmartThings announced a new version of its open software and data exchange cloud called SmartThings Open Cloud.

With the system, device makers can build connected devices without having to set up their own cloud infrastructure.

Samsung is now using the SmartThings Open Cloud as its main cloud platform for managing and integrating data from different types of connected devices.

“The Internet of Things ecosystem today is growing steadily, but there are still many barriers that are inhibiting more rapid progress,” said Alex Hawkinson during the conference.

“For example, device makers today have to build cloud infrastructure which makes bringing connected devices to market a very time-intensive and expensive endeavor,” he continued. “SmartThings Open Cloud and Artik can greatly accelerate this process. Together with Samsung, we’re excited to deliver these two key technologies to continue driving innovation, openness and growth at every level of the IoT from components and devices to applications and services.”

Samsung Electronics is not the only company trying to connect all kinds of electronic devices to the Internet.

Google bought the smart-home company Nest Labs for $3.2 billion last year, while Apple announced in June at the Worldwide Developers Conference that the company is entering the smart-home market with its release of the HomeKit platform, which allows consumers to control home electronics with an iPhone.