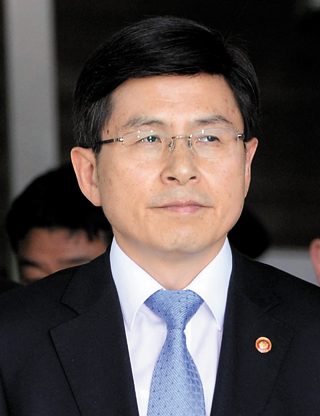 The position was left vacant for 24 days following the resignation of Lee Wan-koo, who stepped down over allegations related to a massive payoff scandal that upended the political establishment.

Hwang, 58, a former prosecutor with a record for pursuing anti-state crimes, joined the Park administration as justice minister in March 2013, when the president first created her cabinet. He is also one of the few ministers to have managed to survive the administration’s near-frequent reshuffles over the past few years.

“In our current reality, eradicating corruption and irregularities and achieving political reform are crucial to facilitate an economic leap and sustainable growth,” said Kim Sung-woo, the senior presidential secretary for public affairs.

“Hwang has a deep understanding of Park’s philosophy, having served as the minister of justice in the administration, and he is the most suitable candidate to eradicate societal corruption to build a new Korea and bring about political reform.”

Kim added that the president decided to nominate Hwang for his “quiet, but meticulous and strict working style.”

Park’s recruitment of Lee, an influential lawmaker, was widely seen as an experiment to empower the nation’s prime minister. His term, however, came to an abrupt end last month with his disgraceful exit over his alleged involvement in a major corruption scandal.

In nominating Hwang, many observers say Park has once again reverted back to her old strategy of appointing a prime minister who is more bureaucratic and less assertive.

Following the announcement, Hwang held a press conference, in which he said he would explain his thoughts in detail via the National Assembly’s confirmation hearing.

“I will do my best to redefine the country’s foundation [and focus on] economic recovery, stabilizing public well-being and normalizing the abnormal,” he said. “I will serve Korea by treating national harmony and social unity as important tasks.”

“I am extremely disappointed in President Park,” said main opposition Chairman Moon Jae-in. “I cannot hide my disappointment in the president’s lack of willingness toward national unity and her inability to find a proper candidate.”

Kim Young-rok, the party’s senior spokesman, also criticized Park for making a decision to recycle an official based on an incomprehensive reason.

“This is an overt declaration of her intention to rule the country as a security state,” Kim said. “She ignored the people’s desire for a prime minister who can unite the country.”

Hwang went after anti-state crimes throughout his 30-year career as a prosecutor and was an expert on the National Security Law.

As justice minister, he oversaw a series of controversial investigations, namely the probe into allegations that the National Intelligence Service waged a cyber-campaign to influence the 2012 presidential election, as well as the latest graft scandal involving late businessman Sung Wan-jong and a group of top politicians, including former Prime Minister Lee.

Hwang also led the Park government’s unprecedented initiative in 2013 to dissolve the minor leftist Unified Progressive Party (UPP) for its links to North Korea and made the closing arguments last year during Constitutional Court deliberations on the case, which saw the UPP, the third-largest party at the time, disbanded in a landmark ruling.

This year, Hwang strongly supported Park’s new initiative to eradicate corruption, and in a letter to the Supreme Public Prosecutors’ Office in March, asked prosecutors to concentrate on rooting out irregularities to the best of their abilities.

He was recruited as justice minister under the Park administration in 2013.

This is the first time a sitting justice minister has been named as a prime ministerial candidate. About 100 candidates were vetted, sources at the Blue House said, though none of them passed scrutiny.

“I was told that Hwang was chosen for his multifaceted strengths,” one official said.

Park has an unfortunate history of botched attempts at naming a prime minister.

Since she took office in 2013, she has made six nominations, though only two have actually gone on to serve as prime minister.