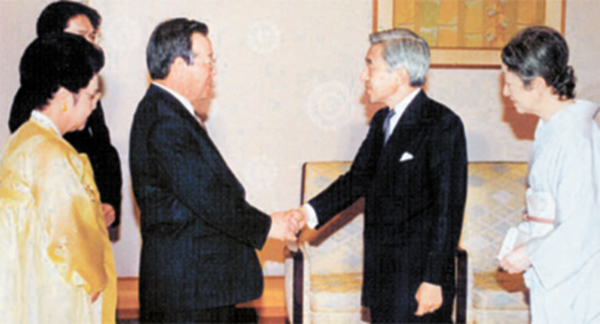 Kim Jong-pil, left, shakes hands with Japanese Emperor Akihito on Sept. 3, 1999 during his visit to the Imperial Palace in Tokyo as prime minister. Kim’s visit marked the first such visit by a prime minister of Korea. Provided by Kim Jong-pil

The issue of Japan’s mobilization of sexual slaves for its armies during World War II, euphemistically called “comfort women,” was an important matter to discuss. Nevertheless, Korea and Japan never brought up the issue during the 14-year tug of war in negotiations for normalization of diplomatic relations. I did not mention it during my talk with Foreign Affairs Minster Masayoshi Ohira in November 1962.

But it was not negligence on the part of Korea over the suffering of women who fell victim to the Japanese imperial army. Korea was not ignorant of the issue nor was it willing to cover up for Japan’s wartime crimes.

The Korean government simply reflected public sentiment over the issue at the time. There was an implicit but strong social consensus that the country should not bring up the issue of comfort women for the sake of the victims, who returned to their homeland after years of suffering inhumane conditions forced on them by the Japanese military during the war. These victimized women were still in their 30s and early 40s and many of them had just gotten married and were trying to live normal lives with children. Laying bare their suffering by talking about it in public could add a new layer of pain on them.

Whether one likes it or not, the past and the future are both connected to the present. As 2015 marks the 70th anniversary of Korea’s liberation from Japan, the issue of the comfort women is an ongoing matter that upsets Seoul-Tokyo relations. Japan needs to be reminded that we are living in an era of global cooperation in which economic, political, social and cultural activities are closely intertwined. Japan cannot live on its own. In that regard, it must reach out to neighboring countries that fell victim to its imperialism in an era of regional cooperation and mutual respect. We now have only a few surviving comfort women victims. Tokyo must take action in a sincere manner to atone for the suffering it inflicted upon them so those women can lead the rest of their lives in peace. 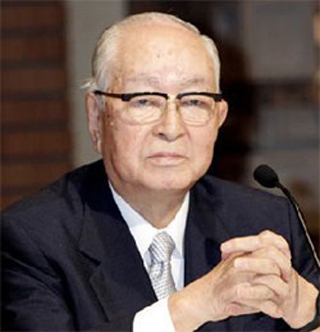 Last year, Japanese political heavyweight Ichiro Ozawa paid a visit to Korea and had lunch with me.

During the meeting I told him, “Prime Minister Shinzo Abe reminds me of Japan’s craze for militarism in the 1930s. Abe must come to his senses on the impact of his actions. He talks about expanding the scope of self-defense capabilities. But such a notion has the great danger of escalating tensions by reinvigorating rightists in Japan. I know you are very conservative, but I think Abe is much more conservative than you are. If he insists on going down the path he is on, it will cause serious problems in the region.”

I continued that Abe must sincerely apologize on behalf of Japan to the comfort women victims, and that the more he denies it, the more difficult it would be for him to fix the problem.

Ozawa said he would relay my message to Abe.

There is one episode I must bring up when addressing the gridlock over the comfort women issue. It was in early 2001 when tensions between the two were on the rise over Japan’s justification of its 36-year occupation of the Korean Peninsula. Anti-Japanese sentiment in Korea also rose as Japan selected a history text book to be used for middle school that omitted Japan’s mobilization of the comfort women.

In protest, the National Assembly in Seoul adopted a resolution condemning Japan’s move to whitewash its wartime aggressions and civic groups started collective action against it.

But Tokyo appeared indifferent to Seoul’s concerns. In an editorial on March 2, 2001, the daily Yomiuri Shimbun said Japan was “a country of diversified ideas,” meaning that it allows different ideas in interpreting its history. It defined Seoul’s criticisms of Japanese textbooks ? which described the comfort women as a volunteer workforce ? as interference in the domestic affairs of a foreign country. It went on to define the forced mobilization of young women into sexual slavery as nothing but a made-up story.

At the time, I was on the sidelines of mainstream politics but that did not stop me from protesting such a distortion of history. On March 7, I visited the headquarters of the Yomiuri Shimbun in Tokyo and met with its then-president Tsuneo Watanabe, who is the current Chairman and a longtime close friend of mine.

Face to face, I said, “Hey Tsuneo, how could you do this to us? You must know the truth as you and I are the same age. If you paid more attention, such an outrageous editorial would never have been published. Who wrote it? Summon all the editorial writers here right now!”

Watanabe and I have known each other since 1961, when he had covered my negotiations with former Foreign Affairs Minister Ohira. Last year, he described me in a Japanese publication as a major contributor to Korea’s unprecedented rapid economic development.

Soon, the paper’s chief editor and all the editorial writers came into the room. I began scolding them in Japanese. “How old were you during the Second Sino-Japanese War (1937-1945)? Do you know what people who collaborated with the Japanese army did back then? I do. They tried to recruit women saying they could send money back to their families by working on a production line, claiming that Japan was short of manpower because of the war. I saw them say this before my own eyes. The majority of the women who fell into their trap were transported to China and worked as sex slaves. And now you are saying all of this is nothing but a made-up story?”

No one dared to speak up. What I was telling them was unvarnished truth, something I witnessed and would never forget. Until then, the editors thought of comfort women as people who volunteered for the work to get out of poverty.

While the issue of comfort women is now a major source of tension between Seoul and Tokyo, Japanese intellectuals who lived through the war readily acknowledge the fact that Japan carried out the forced mobilization of sexual slaves. In the 1970s, it was hard for the comfort women victims to speak. Between May 1971 and March 1972, the government received claims for damages from civilians for Japan’s occupation. A total of 140,000 claims were filed to the government seeking damages of 4 billion won ($3.66 million).

Not a single claim was made by a comfort women victim.

Therefore, it is a courageous act and sacrifice for comfort women victims to demand Tokyo’s apology and its acknowledgement of the operation of the sexual slavery system in the name of protecting the universal rights of mankind for future generation.