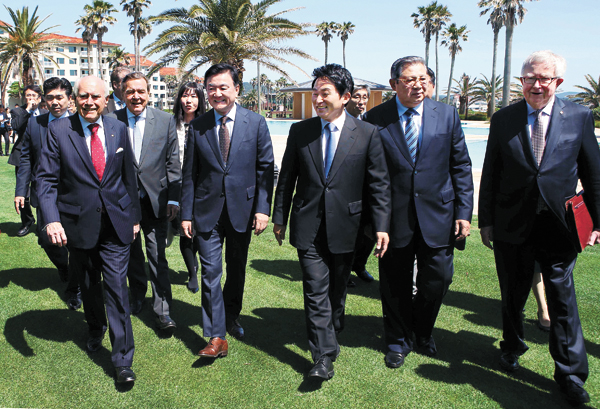 Former German Chancellor Gerhard Schroder, who is noted for his revolutionary social reform measures, advised the need for Japan to “face its dark history” just as Germany did following World War II.

Along the sidelines of the Jeju Forum, Schroder sat down for an interview in German on Thursday with Ryu Kwon-ha, the executive editor of the Korea JoongAng Daily, to discuss the former chancellor’s renowned reform measures, Korean unification and historical disputes in Asia.

A member of the Social Democratic Party, which he headed from 1999 to 2004, Schroder served as the German chancellor between 1998 and 2005 over two terms. 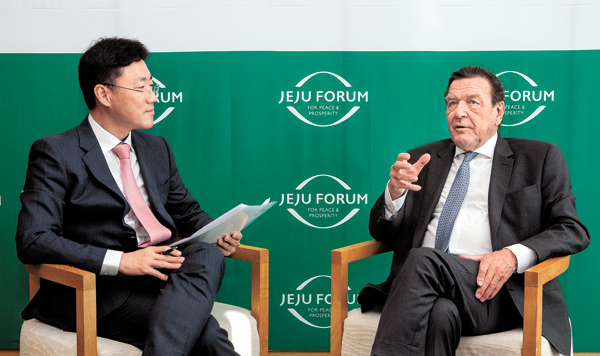 Ryu Kwon-ha, left, the executive editor of the Korea JoongAng Daily, interviews former German Chancellor Gerhard Schroder on the sidelines of the Jeju Forum at the Haevichi Hotel. By Park Sang-moon

He is particularly known for a series of social reforms called Agenda 2010, aimed at improving the German welfare system and its labor relations, which was instrumental in becoming a lever in reviving the German economy.

However, it also faced backlash from his fellow Social Democrats.

He further weighed in on the unification process on the Korean Peninsula, stating that it would be “very costly.”

Q.On March 14, 2003, in the process of the German federal government reforming the country, you proposed Agenda 2010. What is the background on this?

A.It was to raise Germany, who was again the sick man of Europe. For the sake of prosperity, there was no choice but to improve the country’s economic constitution and reform rigid labor market conditions. The gist of Agenda 2010 was to liberalize the labor market, make changes in wage security, to improve public livelihood and be able to respond well to a crisis.

What did you emphasize in the reform process?

First, there had to be change in the labor market, which ensures job security not just for the older generation, but for the younger generation to be able to enter the job market. Second, the retirement age had to be raised from 65. A prepared posture and the mindset of wanting reform are most important.

Was there any aspect that you felt dissatisfied with regarding the Agenda 2010 reform process?

Establishing a minimum nationwide wage, because we couldn’t get enough votes in the Bundesrat [legislature]. Luckily, that was accomplished under the current government and the minimum wage is currently 8.5 euros ($9.48). That’s enough for people to support themselves and their families with the wage they earn.

As you pushed for reforms, your popularity waned. Ultimately, you lost reelection. Do you have any regrets?

That’s a very good question. Who as a politician would want to lose in an election? Of course, I also wanted to win in the chancellor elections. I want to highlight what sort of image a political leader should have in a democratic society today. As a political leader, you need to be able to handle the risk that you may lose. Of course, politics is important, but it is not more important than the country.

Did you not know ahead of the elections that unpopular reforms might mean defeat?

Your 2002 Hartz reforms are often described as a role model for Korean companies.

In the reform process, did Germany’s organization, like our tripartite commission between labor, government and management, play a role?

Japan’s revisionist understanding of history has recently become an issue on the global stage.

If there is something that Germany did well in the past, it was that it settled its history and its past. This is just my wish, but as an example, I hope Japan will also take a similar responsibility in regard to its dark history. Luckily, in Germany there was movement to settle such faults from the past, and it is to be noted that South Africa did as well. In particular, in Korea, there is [the issue of] what happened to the female victims [of sexual slavery by the Japanese military] during [World War II]. What happened to these women needs to be resolved.

Do you have any advice for Prime Minister Shinzo Abe in regard to historical issues?

Time-wise, settling the history must be done. There is no saying that the German example must be taken - you can develop your own shape or form. The past must be faced, and [Korea and Japan] should find its own method to debate what happened in the past. I really think that the time for action has come, and that this will bring about Asia’s liberation.

How should we prepare for unification on the Korean Peninsula?

That is a very difficult question. President Park in her Dresden Address [in March 2014] said that South Korea wants unification. I expect the cost for unification will be very high. But if there is a country that can economically prepare for unification, that is the Republic of Korea.

As an economic power, with internal stability, South Korea is perfectly able. Unification is, however, not something that is just costly, but can open many opportunities. A democratically unified North Korea is a big market and opens up a large economic potential for Korea.

Of course, it is important is that the North Korean system completely be changed. As to what form, I think it won’t be as some sort of confederation, but one where the North and South come under the same system. The North Korean political system has to fundamentally disappear. But it’s difficult to predict whether it will succeed or how long it will take. However, it is not befitting of the current times or era and prevents opportunities for the North Korean people as well.

German Chancellor Angela Merkel is in her third term. What do you think is the key to her long run as chancellor?

First, she is popular. Second, she is benefitting from the effects of my Agenda 2010. (Laughs).