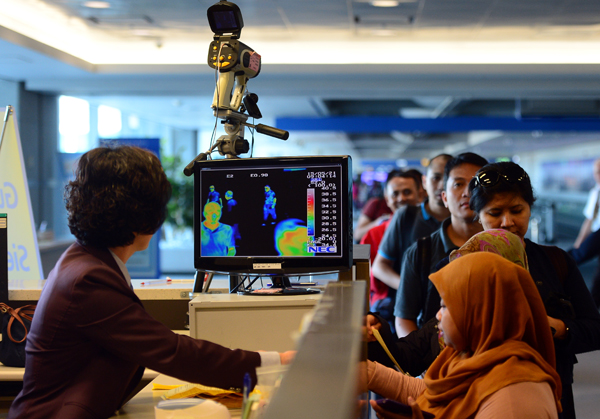 Travelers pass through heat sensors at Incheon International Airport on Thursday after the first case of Middle East Respiratory Syndrome (MERS) was reported a day earlier. The airport was criticized for lax quarantine measures after failing to determine that a 68-year-old man who traveled to the Middle East may have become infected. [NEWSIS]

South Korea on Thursday confirmed a third case of Middle East Respiratory Syndrome (MERS), which was found in an elderly man who shared a hospital room with the country’s first patient.

The Centers for Disease Control and Prevention (CDC) announced on Wednesday that a 68-year-old man who had traveled to Bahrain for about three weeks and returned to Korea earlier this month was found to have been infected with MERS and subsequently transmitted it to his 63-year-old wife.

In a subsequent report Thursday, the CDC added that a 76-year-old patient who spent five hours in the same room with the first MERS patient had contracted the disease while being treated on Saturday at a general hospital in Seoul.

However, none of the three victims are in critical condition, according to the authority.

MERS was first reported in Saudi Arabia in 2012 and is most prevalent in the Middle East. The disease has a latent period of up to two weeks and presents flu-like symptoms.

According to the European Center for Disease Prevention and Control, a total of 1,142 people had been diagnosed with the disease as of May 16, and so far it has resulted in 465 deaths, showing a 40.7 percent fatality rate.

No vaccines or cures have been developed yet.

The new infections have since raised questions over the quarantine authority’s detection system.

The first patient reportedly traveled to Bahrain on April 18, and on to Saudi Arabia, the United Arab Emirates and Qatar, before coming back to Korea on May 4 via Incheon International Airport.

The man passed through a heat sensor, though at the time, the quarantine authority did not detect anything out of the ordinary.

Despite the fact that the patient had visited Saudi Arabia, where 428 people have died of MERS, airport officials at the National Quarantine Station (NQS) have been criticized for lax safety procedures, only measuring the 68-year-old’s body temperature.

Officials at the NQS, a subdivision of the CDC, are supposed to ask incoming passengers about any obvious symptoms - especially if travelers have visited any countries with a high risk for contagious diseases - and report any abnormalities later on.

“We are going to make every single passenger on flights from the Middle East [four times a day] write declaration forms and conduct individual interviews when they pass through Immigration,” said an official at the NQS at the Incheon International Airport.

The first patient reportedly began to show symptoms on May 11, a week after his return, and when the man visited a local clinic, he was prescribed cold medicine.

After his symptoms worsened, he was admitted to a general hospital, where the third patient was infected as the two men shared a hospital room.

“The spray from a sneeze or a cough can travel up to 2 meters [6.6 feet], and it’s possible that a person staying in the same room can be infected,” said Kim Woo-joo, a professor at Korea University. “There have also been secondary infection cases reported between patients and medical staff in foreign countries like Saudi Arabia.”

As the first patient’s condition gradually deteriorated, he was transferred on Sunday to a larger general hospital in Seoul. But because the hospital was full, he stayed the night in an adjacent clinic and was finally admitted to the general hospital on Monday.

A doctor at the hospital reported the case to the CDC, though the man was only isolated since Wednesday after the results of a blood test came back positive.

The CDC is currently monitoring 64 people, including medical staff and the family members who came in contact with the three patients.