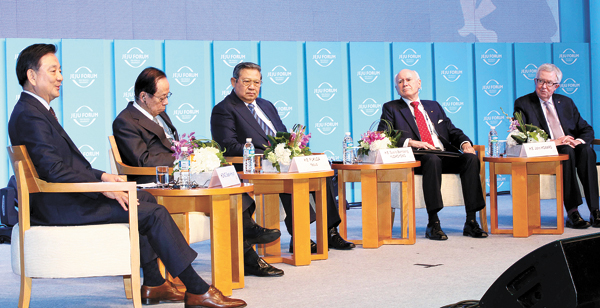 Notable international political leaders attending the 10th Jeju Forum on Thursday tackled the Asia paradox and how to embrace prosperity and stability in Northeast Asia despite diplomatic and security tensions.

Former Indonesian President Susilo Bambang Yudhoyono addressed the complex geopolitical environment in Northeast Asia in his key note speech during the opening ceremony of the Jeju Forum for Peace and Prosperity on Thursday at the Haevichi Hotel & Resort Jeju.

“When I left the presidential office last year, I too was very concerned to see the unraveling of stable relations among the major powers, after two decades of relatively cooperative relations,” he said.

“It is important for us to maintain strategic stability: If a permanent resolution to the disputes still cannot be found, then we need to press on with self-restraint and de-escalation, and try to manage the conflict by preventing the situation from getting worse,” he continued, referring to the situation on the Korean Peninsula and territorial disputes in the region.

The forum, in its 10th round, is themed “Towards a New Asia of Trust and Harmony” and runs until today. It is co-hosted by the Jeju Special Self-Governing Province, the International Peace Foundation, the East Asia Foundation and the JoongAng Ilbo.

A plenary session on the same day brought together the group of former presidents and prime ministers for the World Leaders’ Session, moderated by Hong Seok-hyun, the chairman of the JoongAng Ilbo and JTBC.

Hong, a former ambassador to the United States and the president of the World Association of Newspapers, pointed out issues such as the rise of the “Pacific Century” versus the “American or Atlantic Century,” as well as the so-called Asia Paradox.

“For the first time in history, we have strong global powers in the region - China and Japan,” Hong said. “They are the world’s second- and third-largest economies and military powerhouses. South Korea is getting closer to joining the ranks of the top 10 global economies,”

“The three are closely interlocked in trade, commerce and investment, so they must inevitably pursue the common goals of peace and prosperity,” he added.

However, he pointed out that despite a “reciprocal and tightly knit economic relationship,” the security of the three Northeast Asian countries is “very unstable,” with the territorial dispute between China and Japan and conflict over historical issues alongside North Korea’s rising security threat.

On what kind of “Beautiful Japan” Prime Minister Shinzo Abe envisions, Fukuda said, “What Japan has to aim for should be no different from the past. It is certain that we will walk the same path in the future.

“While there is talk about revising defense measures, this is within the stipulations of the [pacifist Japanese] constitution. The fundamental principles and perception have not changed. The path that Japan has walked for 70 years after World War II will not change in the future.”

“Being ‘in the middle’ is familiar to both Korea and Canada,” said Clark. “We each live beside a dominant power. The pertinent question for us, right now, is: How might multilateral approaches and institutions help stabilize the Asia-Pacific region during this period of a dramatic shift in the balance of power, China’s ascent, and new challenges to American primacy?”

Li added, “Trust and harmony are catalysts for human progress and painkillers for war trauma.”

The association was founded to enhance global cooperation and common development through 46 Chinese organizations and nearly 500 nongovernmental organizations in 157 countries.

“Besides the Chinese dream and the Korean dream, we all have the Asian dream to build a new relationship with trust and harmony,” she said.