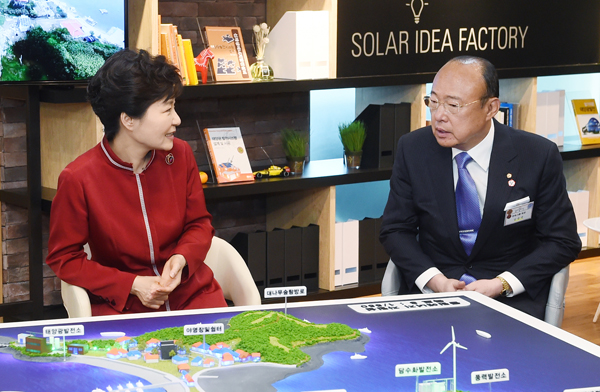 Computer rending of a solar-powered Jukdo Island. Provided by the company

Hanwha Group, the world’s largest solar cell maker, said it plans to open the nation’s first zero-carbon town run solely on solar power on Jukdo Island, a small island on the nation’s west coast, in cooperation with small and medium-sized enterprises in the solar industry.

This will be a signature project for the South Chungcheong Creative Economy Innovation Center, which Hanwha Group jointly opened with the central government in Cheonan, South Chungcheong, on Friday.

The South Chungcheong center is the nation’s 11th creative economy center out of a total of 17 planned under President Park Geun-hye’s creative economy initiative, the administration’s attempt to revitalize Korea’s economy through innovation.

“In the 20th century, Korea used to rely on imports for 100 percent of its energy needs,” said Park in a congratulatory speech. “The era of fossil fuels coming to the end is a challenge but also can be an opportunity for the Korean economy.

“If we move proactively in new energy-related technologies and commercialize them as soon as possible, the Korean solar-energy model will lead the world’s renewable energy market,” Park added.

The center consists of two locations, one of about 860 square meters (9,300 square feet) at the South Chungcheong Techno Park, in Cheonan, and the other about 500 square meters at the Cheonan-Asan KTX train station, in Asan.

The Cheonan campus will be the main site for Hanwha to work with start-ups and SMEs, while the Asan campus will be used as a business center where small companies can get assistance regarding exports.

The South Chungcheong center will be the first of its kind to have a trade assistance desk, which enables SMEs doing solar business to get assistance on exports. Trade experts from the Korea Trade-Investment Promotion Agency, Korea International Trade Association and Hanwha Group will be at the center to help.

Hanwha Q Cell’s focus will be on opening a solar industry cluster in Cheonan and Seosan County, where the company fosters solar energy-related SMEs and start-ups, and doing joint research projects with Daedeok Science Valley in Daejeon. The conglomerate’s solar technology affiliate Hanwha Q Cell became the world’s largest producer of solar cells after a merger in February with another affiliate, Hanwha Solar One.

The effort will start on Jukdo Island in Hongseong County, South Chungcheong, where 31 households of 70 people reside. For power, they use diesel generators.

Hanwha will invest 2.5 billion won ($2.3 million) to completely replace carbon-emitting diesel with eco-friendly solar energy by the end of this year. The transition is expected to save about 93 million won every year, which residents now spend on diesel.

The research focus of the Hanwha-led solar cluster will be on developing solar-powered small products, said Lee Seok-joon, vice minister of science, ICT and future planning, at a press briefing. The global renewable energy industry has recently had trouble attracting investment due to cheap oil prices.

Besides solar panels for factories, power generation and storage, Lee explained that smaller-scale products like solar-powered chargers are examples of products to be developed.