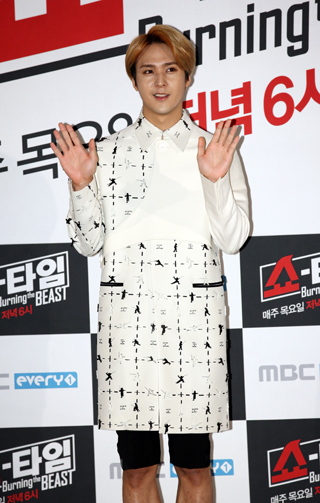 Son Dong-woon of the boy group Beast will bring out his first Japanese solo album, “Kimishika” ? meaning “only you” in Japanese ? on July 1, according to the boy group’s talent agency, Cube Entertainment.
The 23-year-old unveiled the news during the official Beast fan meet-up event held in Yokohama, Japan, on Wednesday.
Out of the six tracks that will be included in Son’s soon-to-be-released album, a few of the songs, including the title song, “Kimishika,” were personally written by the singer in Japanese.
Along with the news, Son unveiled an album jacket photo, which is gaining spotlight from the public.
According Son’s talent agency, thousands of Japanese fans lined up in a very long queue during the recent Yokohama fan meet-up event in order to preorder Son’s first Japanese solo album.
The popular musician released a single, “Udon,” in 2010 along with Kang Min-kyung from the singing duo Davichi.
Son also brought out a pop-style track, “In the Cloud,” in April 2012.