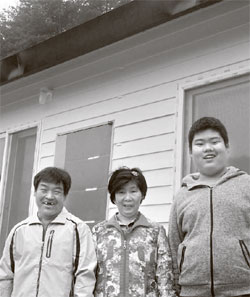 Eom Hyeon-su, 15, right, and his family, who lost their home in a fire, stand outside their new house that was built with the support of ChildFund Korea, Hongcheon County residents and netizens. By Park Jin-ho

Last October, Eom’s previous home was ravaged by flames. The fire, which started in the wood furnace room, almost immediately leapt to other parts of the house. And though the fire department arrived within six minutes, by then it was already too late.

At the time, Eom was living with his parents and a paternal uncle and aunt in an aged farmhouse with a tin roof. They had no bathroom and used an outhouse with a squat toilet located in a field about 20 meters (66 feet) away.

Eom, as well as his parents, uncle and aunt, are all intellectually disabled. They live on livelihood subsidies provided by the government and disability benefits.

After the blaze left them displaced, he and his family lived at their local senior welfare center before moving to a nearby motel, where they’ve stayed for the past six months.

When ChildFund Korea, a nongovernmental child welfare organization, got wind of their situation, they uploaded an account of the family’s story on Daum Hope, a fund-raising website run by Daum, Korea’s second-leading portal site and search engine.

Sending messages of hope as well as contributions, 7,803 Internet users participated in the fund-raising effort. One donation of 10,000 won from a firefighter was accompanied by the note, “Sending a small amount of strength,” while another donation of 50,000 won read, “A gift from the heart from the students at Dukwon High School. Keep up hope.”

There were also a number of anonymous donations of 100 won and 500 won.

Combined with the 3.15 million won that Hongcheon County residents raised for Eom’s family in their annual charity drive, and a donation from ChildFund Korea, 63 million won total was collected for the family and put toward building their new home, which is 5 meters high with an area of 82.5 square meters.

An area architectural firm designed it for free.

Though the house has yet to be wallpapered or carpeted, the family got the chance to take a look at their new home on May 15.

Eom couldn’t stop pacing around his new room and continually turned on the faucet in his new bathroom out of pure awe.

“I’m especially happy our new house has a bathroom we can clean ourselves in,” said the boy’s father, Eom Ki-hwan, 45.

The family will be able to move into their new home by the end of this month. But even with a new house, however, they still face some difficulties.

“Even though it’s wonderful that Eom’s home has been restored through the contributions of so many people, there are many issues that need to be resolved,” said Lee Chang-su, the director for ChildFund Korea’s Gangwon headquarters.

One of them is helping the family restock their house since the fire, which destroyed all their household appliances, furniture and other amenities.

“The family cannot currently afford to repurchase furniture, a refrigerator and other necessary household items,” Lee explained. “They will need support from charitable hands.”