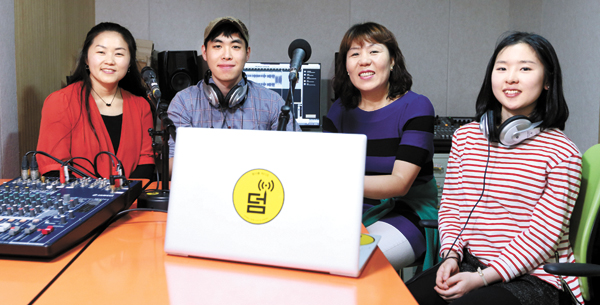 The show’s opening delivery is likely familiar to local listeners: A woman’s voice comes on air, accompanied by the riff of an electric guitar.

“This is Noryangjin Bong-suk’s ‘Metal Heaven,’ a music program starting a new week. Now you may feel sleepy after lunch. It’s been two weeks since the last episode, and today I’ve prepared some progressive and classic hard rock songs. So here we go.”

So goes the introduction for the show, run by Dongjak FM, a community radio station for Dongjak District, southern Seoul.

For over a year, Yu Hwa-suk, who runs a real estate business, has hosted “Metal Heaven,” which boasts her soft, recognizable voice as well as a distinctive play list.

“I took this job because I’m a big fan of hard rock,” she said.

Community radio, the third type of radio broadcasting in addition to commercial and public broadcasting, has come into its own in Seoul over the past few years. Sixteen community radio stations currently operate in the city, while four new stations including Seongdong FM in Seongdong District are preparing to debut.

Since 2012, such stations have increased, with 20 expected to be airing by the end of this year.

With podcast shows also gaining in popularity, community broadcasting has caught on thanks in part to its low cost: Broadcasting gear, including microphones and computers, can be purchased for about 3 million won ($2,700).

Content unique to area residents has led to the growth of community radio.

Deom, a community radio station serving Changsin-dong in Jongno District, was launched by its residents three years ago and produces programs across a variety of themes, from political issues to diet and nutrition.

“Programs are made and consumed by the residents, and their interests are addressed in the programs,” said Jo Eun-hyeong, the head of the radio station.

Kim Seon-suk, a DJ for Deom, said that she was preparing to produce a program detailing multiple personal trips. She works at a sewing factory and has already completed three pilot episodes.

“Even though the cherry blossoms were in bloom, many of my colleagues at the sewing factory couldn’t afford to enjoy it,” the DJ said. “I wanted to share my experiences on these trips.”

Residents in Changsin-dong are also looking forward to a city government-led project to revitalize the neighborhood, while Deom is currently planning a new radio show to collect local opinions as a way to help bridge the voices of the district’s residents and the authorities.

“It will help to solve problems people have long complained about, like the narrow alleyways,” Jo said.

Programs produced by the community radio stations can be downloaded from the stations’ websites or via smartphone applications.

Only two stations, Gwanak FM and Mapo FM, have approval to use frequency modulation (FM) broadcasting.