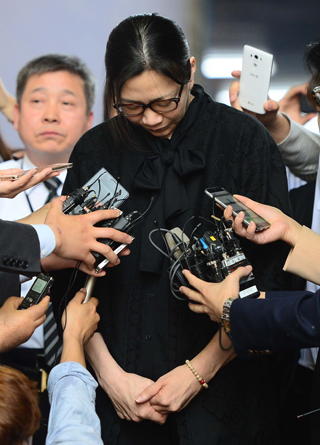 Former Korean Air executive Cho Hyun-ah is surrounded by reporters as she leaves the Seoul High Court in Seoul on Friday. [NEWSIS]

A Korean court on Friday suspended the prison term of the former Korean Air executive whose onboard “nut rage” tantrum delayed a flight last year, immediately ending her incarceration.

Cho Hyun-ah, the daughter of the airline’s chairman, did not violate aviation security law when she ordered the chief flight attendant off a Dec. 5 flight, forcing it to return to the gate at John F. Kennedy Airport in New York, according to the Seoul High Court.

The upper court sentenced Cho to 10 months in prison and then suspended the sentence for two years.

It said she was guilty of assault.

A lower court had earlier sentenced Cho to a year in prison. She has been locked up since her December arrest.

The Korean Air executive achieved worldwide notoriety after an onboard outburst triggered when a first class flight attendant served her macadamia nuts in a bag instead of on a dish.

Cho, head of the airline’s cabin service at the time, had a heated, physical confrontation with members of the crew.

Swarmed by reporters at the court, she made no comment in front of TV cameras, bowing her head and burying her face in her hands as the media pressed in and yelled for her to say something.

The incident was a lightning rod for anger in a country where the economy is dominated by family-run conglomerates known as chaebol that often act above the law.

It found her not guilty of interfering with a transport ministry investigation into the incident. Cho pleaded not guilty and prosecutors had called for three years in prison.

The aviation security law is meant to regulate highly dangerous acts such as hijacking. But the upper court said Friday that there wasn’t a big safety threat posed by Cho’s actions, and returning the plane that was taxiing did not constitute forcing a change in the plane’s route.

Kim Sang-hwan, head of the three judge upper court panel, said that even though Cho used violence against crew members, she should be given a second chance. The judge also cited her “internal change” since she began serving her prison term as a reason for lessening the sentence.

The upper court also took into consideration that Cho is the mother of 2-year-old twins and had never committed any offense before.

She has resigned from her position at the airline.

“It appears that she will have to live under heavy criticism from society and stigma,” said Kim.