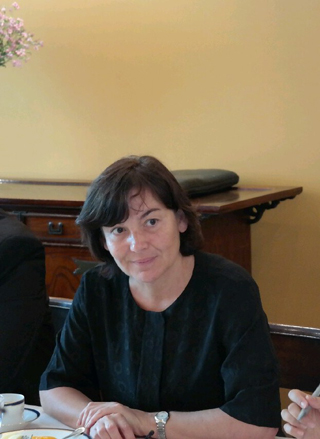 Korea’s role in the global battle against climate change relies heavily on supplying green technology and the knowledge of how to use it to developing countries, stressed Annick Girardin, the French minister of state for development and francophony, on Friday at the French ambassador’s residence in Seodaemun District, central Seoul.

Girardin, who arrived here with a French delegation for the World Education Forum 2015 in Incheon, said during a press conference held on the second of her three-day visit to Korea that green technology is considered separate but essential from sheer financial aid for beneficiary countries.

“Korea was one of the first countries in the world that vowed to contribute to the Green Climate Fund,” she told the local press through a French interpreter, adding that the establishment of the fund’s headquarters in Songdo, Incheon, in 2010 was a result of the country’s “solid will.”

Girardin’s roughly 90-minute talk on climate change issues came ahead of the 2015 UN Climate Change Conference in Paris from Nov. 30 to Dec. 11. Some 40,000 people from around the world are expected to join the 21st session of the UN Framework Convention on Climate Change’s conference. Girardin has recently been traversing borders to promote the annual meeting and raise awareness of its primary goal, which is to reach a universal, legally binding agreement for heralding a low-carbon Earth for the first time.

French Ambassador to Seoul Jerome Pasquier stated that Korea will “bridge” the gap between the circle of developed countries and developing countries at the global conference.

“If the status quo [of carbon dioxide emission] continues,” warned Girardin, “that means [the planet’s] surface temperature will rise by 4 to 5 degrees Celsius [39 to 41 degrees Fahrenheit].”

“Let me put it this way: That equals to a sea-level rise of more than a meter. Every single one of us has to join the effort to solve climate change.”

This year’s meeting is distinct from previous ones in that each of the 195 member states is obligated to submit a national contribution presenting how it is planning to contribute to the global effort against climate change.

So far, 38 countries, including the United States and members of the European Union, have made submissions. Korea has not.

“As a representative of the host country who must act neutrally, I can’t grade the reports,” said Girardin. But it’s “obvious” that the United States and China must set greater carbon dioxide reduction goals than, for example, African countries, she added.