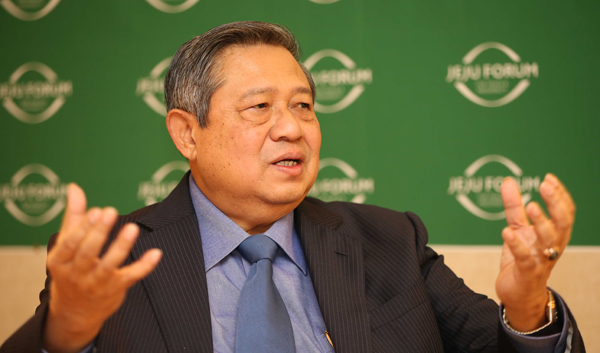 Susilo Bambang Yudhoyono, former president of Indonesia, appealed to Korea to play a greater mediator role in Northeast Asia, especially as a bridge between Japan and China.

He also urged Seoul and Tokyo to engage in a “genuine relationship” in an interview with the JoongAng Ilbo and Korea JoongAng Daily on the sidelines of the Jeju Forum for Peace and Prosperity on Friday at the Haevichi Hotel and Resort Jeju on Korea’s southern island.

“The leadership of Japan and Korea, in my humble suggestion, should be in a genuine relationship,” he said, which would provide “a way for a critical liaison.”

But Yudhoyono added the task was not Korean President Park Geun-hye’s and Japanese Prime Minister Shinzo Abe’s alone, but for leaders in the future as well.

“I think Japan will someday also announce what happened in the 1940s during World War II,” he said, referring to Tokyo’s backpedaling on historical issues such as the sex slaves of the Japanese military. “So that is my hope, actually, things that can be done within this decade. And it will be good if Japan is willing to do that.”

He added, “Balance is very important, balance in the sense of how you look to your past. I know the bitter history that is shared by Korea and by many countries in the region. Secondly, a forward-looking attitude is needed. After all we need friends.

“When this generation cannot overcome that kind of situation, then probably the generation to come will be able to have a proper balance in looking at their past and their future,” he said, adding that sometimes it takes time for differences and hostilities to be resolved.

The former four-star army general from East Java, known for his reforms, was his country’s sixth president. He completed his second five-year term in office last October.

Last week, Yudhoyono was unanimously reelected chairman of Indonesia’s Democratic Party, which he co-founded in 2001.

Yudhoyono referred to Indonesia’s colonial past and overcoming hostility toward the Netherlands.

“It is challenging because 10, 20 years after we became an independent nation, the feelings of the Indonesian people were still hostile to colonial powers, to the Dutch,” he said.

“The ex-colonial powers also realized that they had to do something for Indonesia and for other countries,” he said. “And we learned a lot and we tried our best. We are progressing well, actually.”

He recalled that in 2005, during his presidency, Dutch Minister of Foreign Affairs Bernard Bot attended Indonesia’s Independence Day anniversary celebration.

“My point is, over time, if South Korea and Japan can talk openly, honestly, then there must be reconciliation in a broader sense. It’s not easy, but Indonesia overcame our past with our ex-colonial powers.”

In regard to tensions between China and Japan, he said, “If Japan and China can overcome two factors - rivalry and territorial disputes - and engage in more economic cooperation, then the situation would be better than what we have now. If those countries are unable to overcome that kind of situation, I have to be frank, the situation will not be good for Asia, for all of us.”

He continued, “I appeal to South Korea to continue playing a positive role in closing the gap between Japan and China.” He said the two countries may accept Seoul’s role as a mediator. “South Korea is not seen as a rival for China and Japan, you are considered as a middle power.”

He added, “You are in a better position to play a greater role in Northeast Asia and in overall Asia because you are a middle power, you are a successful country, you are an advanced economy, you are an industrial country, so you are respected by all countries in the region.”

Indonesia, like Korea, is part of a group of five middle-power nations that in 2013 formed an informal platform for cooperation and consultation that tackles regional and global issues. The foreign ministers of Mexico, Indonesia, Korea, Turkey and Australia, or Mikta, gathered in Seoul for a regular meeting the same day.

In regard to regional tensions, Yudhoyono said, “We have China, Japan, Korea, Asean and the U.S. as Pacific powers. I am hoping that all of the countries and powers in the region maintain positive relations.” He urged a “dynamic equilibrium” to maintain peace and stability in the region, so that “no single power dominates the region, and no single power threatens overall security in region.

“There was also conflict among Asean members back in the 1960s but after all, we met together, built consensus, pursued a give-and-take policy, built trust, and reduced our trust deficit. Finally, we agreed to a framework of cooperation, and it was becoming Asean. We are seeing the situation in Northeast Asia.”

Indonesia maintains bilateral ties with both Koreas, but Yudhoyono pointed out, “China is in a better position to persuade North Korea, to maintain a healthy and good situation in the region, but it seems to me China is having difficulty in playing that kind of role.” He also said that the stalled six-party talks among China, Japan, Russia, the United States and the two Koreas to denuclearize Pyongyang are “not working well.”