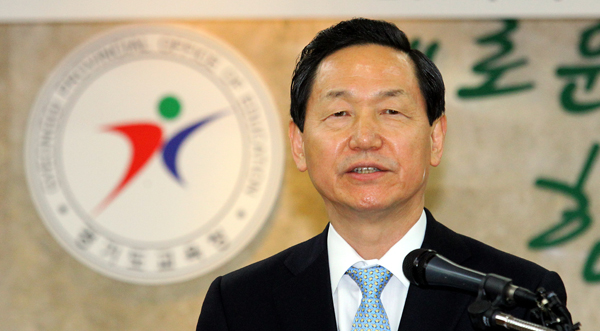 The main opposition party appointed Kim Sang-gon, the former head of the Gyeonggi Provincial Education Office, as the chief of its reform committee.

Kim held a press conference Sunday following a meeting with Moon Jae-in, the chairman of the New Politics Alliance for Democracy (NPAD), in which he announced his decision to accept the post. He will be tasked with reviving the party’s plunging popularity and resolving its factional stripes.

The NPAD has struggled with internal rifts in the aftermath of its defeats in the April 29 by-elections.

Kim, the architect of the free school lunch program, is known as an icon of reform in the liberal education circle. The 65-year-old, a former professor, was elected twice to serve as the head of the Gyeonggi Provincial Education Office from 2009 to 2014.

Kim ran last year in the Gyeonggi gubernatorial primary for the main opposition party but lost. He also tried to run in the July by-election in Suwon, but failed to win the nomination.

“Moon promised that he will delegate all necessary power to the reform committee,” Kim said. “Korea’s politics can only stand upright when the largest opposition party can be revamped and give hope to the people.”