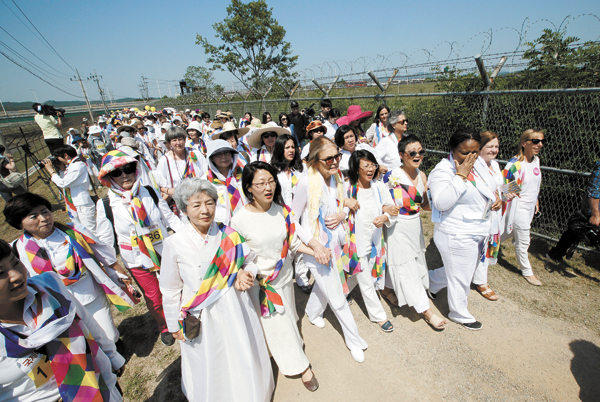 PAJU, Gyeonggi - A group of international women’s rights activists crossed the heavily fortified border with North Korea on Sunday via bus near Kaesong, wrapping up a six-day stay in the country that aimed to bring peace to the divided peninsula.

The group, comprised of 30 activists from 15 countries that included prominent social activist Gloria Steinem and two Nobel Peace prize winners, stood before a throng of reporters at the Gyeongui CIQ on Sunday upon their arrival in the South at about 12:30 p.m.

Their return over the weekend from North Korea marked the International Women’s Day for Disarmament and was part of the 2015 Women Cross DMZ Peace Walk campaign.

Speaking on behalf of the group, Steinem said the women felt “very celebratory and positive” that they had “created a voyage across the DMZ,” adding that they had accomplished what was “said to be impossible.”

“We were able to be citizen diplomats,” said the 81-year-old, who is widely respected for her social activism and participation in the feminist movement in the United States during the 1960s and ’70s.

Ahnkim Jung-ae, one of the organizers in South Korea, said the event was promoted with the aim to bring about peace and reunification to the Korean Peninsula through the women’s power.

Despite the group’s intent to help the two Koreas reach for mutual understanding, its six-day trip to the North prompted concerns in Seoul that their stay there would simply be used by Pyongyang for propaganda purposes.

North Korea’s Rodong Sinmun carried an article on Thursday in which it quoted members of the group as extolling late North Korean leader Kim Il Sung for his “numerous achievements,” including his fight against the Imperial Japanese Army during its occupation of the Korean Peninsula, during their visit to Kim’s preserved birthplace.

In regard to the state-run newspaper’s report, Steinem said the attributed remarks were “absolutely not true.”

During their stay, the group met with North Korean women in Pyongyang, seeking, in part, to enhance understanding of one another.

Coleen Baik, one of the group’s members, posted photos on Twitter of the meeting Thursday with the women in Pyongyang, who were dressed in the traditional hanbok, commenting that the “sisters embraced in tears” and made “promises of peace.”

Still, some criticized the organizers for being too naive and failing to address the dire human rights conditions perpetrated by the North Korean regime, such as the country’s political prison system, believed to hold more than 200,000 state-designated dissenters.

In response, Nobel Peace Prize laureate Mairead Maguire, who is acclaimed for her non-violence efforts in Northern Ireland, said human rights can be ensured when there is “a normal situation” in which countries are not at war and called for an end to a series of economic sanctions on the North for its nuclear development in violation of United Nations resolutions.

She also called for a peace treaty between the two Koreas, arguing that it would allow human rights to improve. In making its demand for Seoul and Pyongyang to sign such a treaty, the group said on its website that 10 million Korean families are still separated by the demilitarized zone (DMZ) and 70 million Koreans “live in a state of war due to unresolved conflict.”

The women’s rights group initially planned on crossing the DMZ through the truce village of Panmunjom for the significance it would carry: The hamlet was the venue for the signing of the armistice agreement that halted the 1950-53 Korean War.

The group, however, was pressured to alter its plan after the South Korean government recommended it take the western corridor along the Gyeongui Line railway near Kaesong.

The Ministry of Unification said it did not approve of their plan to come to the South through Panmunjom, citing safety concerns and adding that it was unprecedented for a civilian group to make such a journey.

On Sunday, the North’s powerful National Defense Commission proposed a joint investigation into the 2010 sinking of the ROK Cheonan warship, an incident that killed 46 South Korean sailors.

South Korea is certain to rebuff Pyongyang’s suggestion. Seoul concluded in its own investigation that North Korea torpedoed the vessel on March 26, 2010, in the West Sea and has since demanded a formal apology - a precondition for lifting the retaliatory economic sanctions imposed in the same year.

The sanctions halted all inter-Korean business cooperation with the exception of the Kaesong Industrial Complex.

The group is scheduled to hold a conference today with members from women’s rights groups in Seoul, where they will share their visions for bringing peace and stability to the Korean Peninsula.