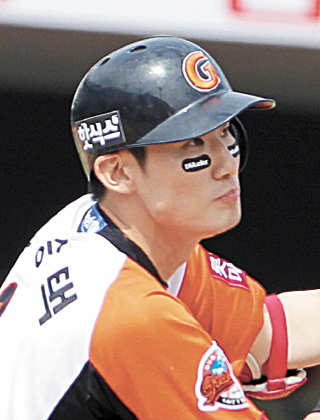 Last week’s Korea Baseball Organization (KBO) League had games with scores galore, which was a dream for offense-minded fans, but a nightmare for pitchers.

The highlight was the series between the Lotte Giants and the LG Twins in Busan that ended Sunday. In three games, the two teams produced 75 runs, 41 by the Giants and 34 by the Twins. The Twins won the first game on Friday, 20-12, but the Giants rebounded on Saturday (10-3) and Sunday (19-11) to take the series.

Experts say these “handball scores” in baseball are not so much because of the rise of offense as the collapse of starting pitching. Neither the Giants nor the Twins, for example, has a reliable No. 5 starter in the rotation.

The hottest team in the league last week was the NC Dinos, with a five-game win streak. The Dinos also joined the party in a series against the Nexen Heroes over the weekend, scoring 31 runs in winning three games, 10-0, 9-5 and 12-11. The Dinos are 4-0 against the Heroes this season.

The defending champion Samsung Lions showed some firepower of their own last Tuesday against the Doosan Bears, beating the home team, 25-6. The Lions’ 25-run total is the second-highest in KBO history, two shy of the record set by the Daegu-based club on May 4, 1997, in a 27-5 drubbing of the LG Twins.

However, the Lions’ offense was ice cold against the Kia Tigers, failing to score in 1-0 and 2-0 losses on Saturday and Sunday. It was the first time since Sept. 27, 2008, the Lions had been shutout twice in a row.

Even the last-place KT Wiz enjoyed a weekend offensive boost with a 13-4 beating of the Hanwha Eagles on Sunday. It was the first-year team’s highest run total of the season.

Meanwhile, both the SK Wyverns and the Nexen Heroes will look to end four-game losing streaks this week before they meet each other for a three-game series starting Friday. The Wyverns host the Lotte Giants today through Thursday in Incheon, while the Heroes visit the Lions.

The Wiz will look for its 10th win of the season this week against two Seoul-based teams, the LG Twins and the Doosan Bears.

What was that sound? An explosion of offense

Oh Seung-taek was an unknown even to Giants fans. Since signing with the Busan club in 2011, he had appeared in only 56 games.

But in a three-game series against the LG Twins over the weekend, he was the “tallest” among Giants. The 23-year-old went 3-for-5 with two RBIs on Friday filling in for injured third baseman Hwang Jae-kyun.

Giants manager Lee Jong-woon said Oh will be back on the bench when Hwang returns from a hamstring injury, but it looks like he has earned an opportunity to play more.

A breach of the so-called code of baseball - under which a team with a big lead (usually five runs or more) in the late innings should not steal bases or bunt - was a hot topic in the KBO last month after there was a bench clearing “beanball” incident between the Hanwha Eagles and Lotte Giants.

The Eagles charged the Giants with violating the “unwritten code,” but now they are the accused.

Although there was no brawl or bench clearing, fans in Suwon on Saturday saw KT Wiz captain Shin Myung-chul shout toward the Eagles bench after a 6-1 Wiz loss.

With a five-run lead, Eagles infielder Kang Kyung-hak stole a base in the top of ninth. Then in the bottom of the ninth, with two outs, the Eagles changed pitchers twice.

The situation cooled down after Eagles manager Kim Sung-keun later said he was sorry if Wiz players were offended, while Shin also apologized for his behavior.

Wiz manager Cho Bum-hyun said he also understands the situation of the Eagles.

However, baseball fans were divided online as to whether the Eagles had violated baseball’s “unwritten code.”