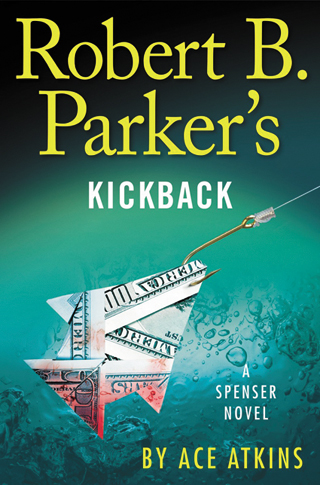 When a teenager’s innocent social media prank turns into a punishing trip behind bars, the Boston private eye Spenser begins a probe that stretches from freezing, blustery New England all the way to a sunny Florida marina.

Along the way he gets a look at an Alcatraz for boys and finds himself on the wrong side of the law, at least as it is practiced in a bleak Massachusetts mill town. As Spenser has in the past, he gets help from Hawk, his well-armed sidekick, and finds time for R&R with the lovely, urbane Susan Silverman.

In short, “Kickback’’ is classic Spenser - the Spenser of wry wit, tasty food and drinks, hard workouts and lethal confrontations. It is a reader’s guide to greater Boston and a nostalgic trip into the noir world of guys who privately investigate all manner of wrongdoing.

This is Ace Atkins’ fourth Spenser novel since the Robert B. Parker estate chose him to keep the private eye on the case. Once again, Atkins has delivered a thriller that evokes the best of Parker’s Spenser series, especially the punchy back-and-forth of the dialogue.

Atkins at times shifts the narrative point of view away from Spenser. In these short sections, which heighten the novel’s suspense, the abusive treatment of the young inmates unfolds without Spenser around to stop it.

Spenser also leaves Boston to make a trip or two to an upscale Florida marina development. The locale is in the Tampa-St. Pete vicinity, which Atkins knows well from his days as a newspaper reporter for the old St. Petersburg Times.

Some of Parker’s best Spenser novels involved the private investigator coming to the rescue of teenage girls and boys who are at risk. That is the case in “Kickback,’’ which finds 17-year-old Dillon Yates and other boys railroaded without legal help onto a hellish island prison.

Atkins’ story line was inspired by the “kids for cash’’ scandal that came to light several years ago in Luzerne County, Pennsylvania, involving two juvenile court judges and a for-profit juvenile lockup. As Spenser learns: The kids are all right, but the judges are not. AP