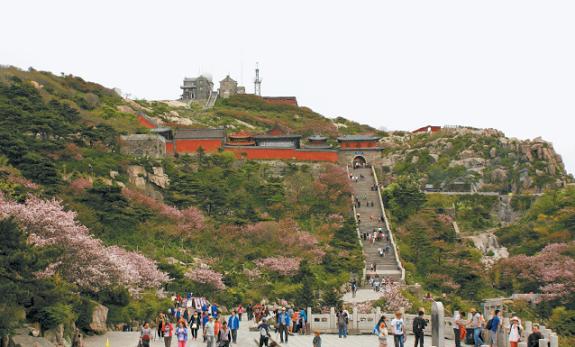 Many travelers take the stairs up to Jade Emperor Peak on Mount Tai in Tai’an, in China’s eastern Shandong Province. Climbing to the top is popular and considered by many locals as the closest place to heaven. By Lee Sun-min


QINGDAO and TAI’AN, China - Shandong Province in eastern China, one of the mainland’s closest vacation destinations to the peninsula, has attracted more Koreans in recent years thanks to two of its most famous attributes: beer and mountains.

The province is home to the city of Qingdao, popular for its beer Tsingtao, and Tai’an, renowned for Mount Tai. But it is also making a name for itself among locals here for its “Korean trail,” which winds through Mount Tai and other peaks in the area, which China hopes will attract an uptick in Korean travelers.

The move was supported by both the Korean and Chinese governments, with 2015 designated as the year to visit China. In July 2014, President Park Geun-hye and her Chinese counterpart Xi Jinping agreed to boost travel and cultural exchange between the two nations. Xi sent a congratulatory letter to Seoul early this year to mark the promotion, saying that increased travel opportunities among citizens from both countries would encourage the exchange of other cultural content. Next year will be the year to visit Korea for the Chinese. 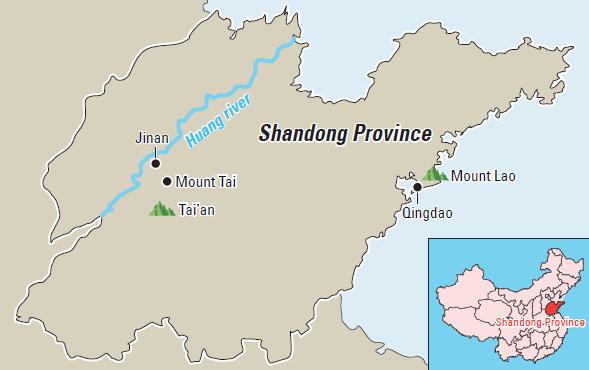 In recognition of this newfound cooperation, the Shandong Tourism Administration invited the Korea JoongAng Daily and journalists from other Korean media outlets to tour its most popular travel destinations. Its current focus is to bring in serious trekkers and young people interested in seeing how Europe’s influence transformed the Chinese harbor city of Qingdao.

Many who have tried Tsingtao may have felt that the beer tastes different each time they had it. One local guide explained that it is because the water used to make the beer is different - better - in Qingdao. 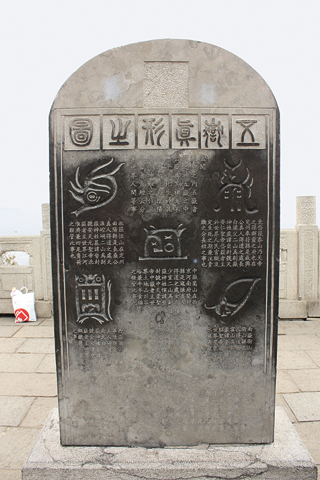 This marker on Mount Tai names the mountain as one of China’s five most sacred.

“A person who remembers drinking Tsingtao here, would think it tasted different [elsewhere],” local guide Kim Eun-hee said, adding that the Tsingtao made here contains water from nearby Mount Lao, known for its high quality water.

The beer factory was established in Qingdao in the late 19th century during German colonial rule. The original building remains in the same place and now houses a museum that provides a brief history of the company and how the beer is made. The tour also comes with free beer and snacks.

To greet beer fans, locals started to open bars in front the museum to form a beer street.

Thanks to the popularity of its beer, the city now hosts the Qingdao International Beer Festival, one of the largest festivals of its kind in Asia.

The annual event, held in mid-August, draws travelers and locals alike. This year’s festival is tentatively scheduled to start Aug. 18. Some vendors even offer patrons beer in a plastic bag - the same way locals in the early 20th century drank their libations and transported them home. 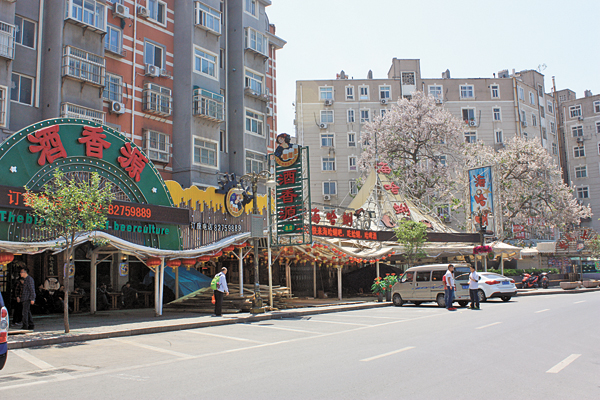 Visitors exiting the Tsingtao Beer Museum in Qingdao are greeted by a line of bars that have local beer on tap.

German colonial rule lasted about 100 years here, so the town looks noticeably different from China’s other major cities. In the old quarter, many of the buildings have a European-style construction with a dark orange roof, while the town’s newer areas have taller, more modern buildings. Many local brides-to-be visit Qingdao to have their pre-wedding photos taken.

Mount Tai, a Unesco World Heritage Site, is a popular destination for travelers entering Shandong. It takes about five hours by bus from the harbor city of Qingdao.

A local guide explained that many local elders visit the top hoping to attain health and wellness. 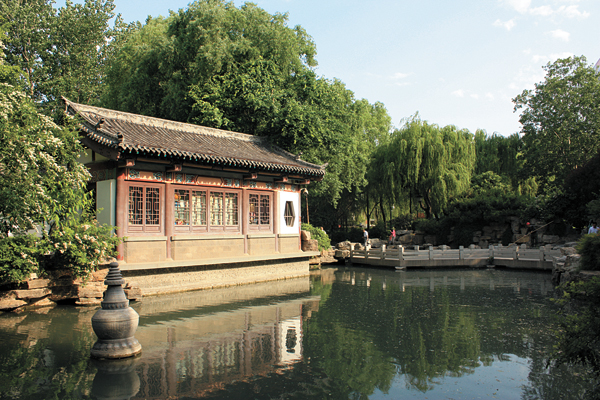 Left:Qingdao, which was under German rule for almost a century, still maintains the buildings constructed during that period in its old quarter. More recently developed areas of town, shown in the back, boast tall, modern skyscrapers. Right:RiBaotu Spring Park in Jinan, the capital of Shandong Province, is an ideal place to take a walk and is known as the City of Springs.

The mountain, at an altitude of 1,545 meters (5,069 feet) above sea level, requires a full day to ascend, while a ride in the cable car cuts that time in half.

A 20-minute bus ride takes visitors up about 800 meters, where they may then transfer to a cable car for another 10 minute ride. Tourists can also opt to walk up the stairs for a bit of a leg workout - 7,000 steps, to be exact.

The tallest Jade Emperor Peak houses a temple that is more than 2,000 years old. Many of the emperors who ruled over China’s ancient kingdoms often visited the mountain in the hopes of making it to heaven. Near the peak is a hotel for anyone looking to spend a night on the mountain.

Walking around the top of the mountain takes about an hour or more, though some serious hikers may be disappointed to find how easy it is to get there.

Taking that into consideration, the Shandong Tourism Administration is working on paving a new route especially for Korean hikers. Named Hanguk Gil, which roughly translates to “Korean trail,” the route includes dirt pathways and stone steps for a more natural experience. It is approximately an eight-hour round trip from the bottom to the top, so it is encouraged that trekkers start their hike early to finish before sunset.

Mount Tai is the first mountain to have a Korean trail and more will be established in the coming years. Hanguk Gil is typically closed to beginning hikers, though management allows those with an idea of the difficulty of the route into the area.

After a day’s hike, tourism officials recommend traveling to the adjacent city of Jinan, the capital of Shandong Province. Nicknamed the City of Springs, Jinan is home to Baotu Spring Park, where it is possible to interact with locals on walks along the ponds.

The ease of a ferry ride

Of course, traveling to neighboring countries from Korea means purchasing a plane ticket, with the country surrounded by water and North Korea up top. But those traveling with a large group would do well to consider taking other means of transportation - a ferry, in particular.

Thanks to its proximity from Incheon, about 500 kilometers (310 miles), it is possible to travel around Qingdao by ferry. Though, tourists should remember that they will be trading their time in exchange for traversing the waters. It usually takes about 17 hours from one harbor city to another, which includes an overnight stay on the boat.

Ferries leave Incheon around 6 p.m. and Qingdao around 4 p.m.

Weidong Ferry, a company established from both Chinese and Korean investment, offers water travel to each city three days a week, with each vessel capable of carrying about 600 passengers at a time.

It takes longer, but for most, the experience onboard with family and friends is worth the wait. Those with up to 40 people in a group can rent out a large-style room in which it is possible to rest or partake in a variety of leisure activities like video games. Tourists wanting a break can just unfold the blankets on the floor and take a nap. This type of travel is most popular among those on alumni outings.

For a more eventful evening, the ferry offers an intimate 20-minute fireworks show that can be seen over the sea. No big crowds here.

The ferry staff can also arrange a cocktail hour by request, complete with finger food, before the fireworks at an additional cost for large groups. It is also a perfect time to enjoy the sunset. Boat attendants also hand out bow ties to men for some fun photo-snapping.

The ferry is a lot like a cruise in that it has a movie theater, a noraebang (karaoke room), a coffee shop, as well as a duty free shop. It also has a convenience store on board.

This type of travel has become especially popular these days with cyclists who wish to cross Jiaozhou Bay Bridge in Qingdao, which spans 26.7 kilometers. It is free to bring bicycles on board.


For more information on traveling around Shandong Province, go to www.travelshandong.com. For more on ferry transport to Qingdao, visit www.
weidong.com, or call (032) 770-8000.