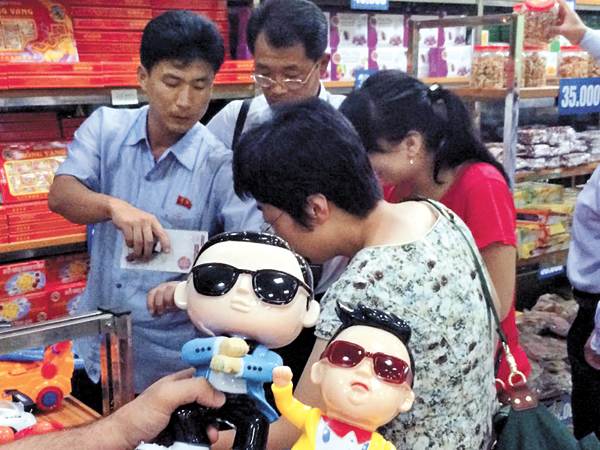 North Korean visitors look at dolls of South Korean pop singer Psy in a store in Singapore. As the country continues to do business with Singapore, North Korea is also garnering tourism know-how from Singapore. [Choson Exchange]

Josh Thomas, a 28-year old American graphic designer, visited Pyongyang in 2013 on a beer tour. Thomas visited the Taedonggang Beer Brewery and Paradise Department Store and enjoyed the beer served at the Yanggakdo International Hotel. He said it is actually better than the beer made in South Korea.

“Going on a beer tour to North Korea, it was a longtime dream come true,” said Thomas.

The tour was organized by Young Pioneer Tours, a company founded by a group of expatriates in China that organizes tours to North Korea.

North Korea is usually in the headlines for its nuclear weapons program, missile launches, attacks on South Korea and miserable human rights record. Much less attention is paid to the growing number of foreign companies like Young Pioneer Tours with business in North Korea. 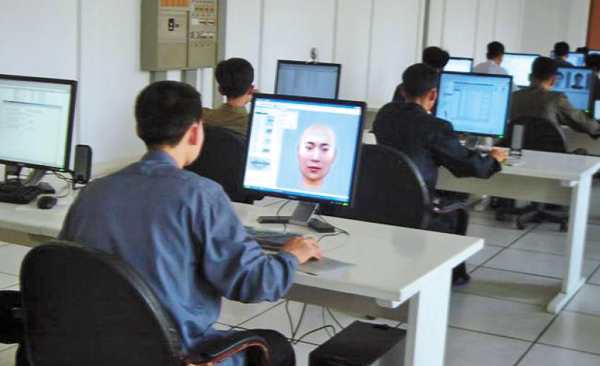 According to the U.S. Office of the Director of National Intelligence, 351 foreign companies launched joint ventures with North Korean companies from 2004 through 2011. Of these, 75 percent were Chinese. From the 88 companies whose investment sizes could be determined, the total invested amount was estimated at $2.32 billion.

Since the U.S. started collecting data, the spectrum of companies profiting in North Korea has widened.

According to the Hyundai Research Institute and the North Korea Resources Institute, companies from China, the United Kingdom, Germany, the Netherlands, Italy, Egypt, Thailand and Singapore have begun operations in North Korea.

North Korea is trying its best to attract foreign investors and capital.

“North Korean experts are studying abroad in Sweden, Germany, China, Singapore and other countries to catch up to international standards,” said James Min, vice president of the DHL legal department, at an international conference called “Doing Business in North Korea” hosted by the Institute for Far Eastern Studies of Kyungnam University in Changwon, South Gyeongsang.

A large part of its effort to attract business has been the promotion of economic zones.

Since enacting an economic development zone law in May 2013, North Korea now has a total of 24 Special Economic Zones (SEZ), with five central SEZs and 19 provincial level SEZs.

Since the construction of the Rason SEZ in 1991, North Korea has continued to build zones but most have foundered due to the lack of infrastructure and limitations in the openness of the SEZs.

Kim ordered the thorough examination of over 6,000 pages of information on SEZs worldwide.

Analysts say the Amnok River Economic Development Zone, the Waudo Export Processing Zone and the Hyondong Industrial Development Zone are worth watching. South Korean capital could go into them.

Ahn Byeong-min, a researcher at the Korea Transport Institute, said, “These three areas are not only easily accessible, but they also have the advantage of matching well with inter-Korea economic cooperation policies.”

Contiguous to Dandong, China, the Amnok River Economic Development Zone has a geographical advantage in exporting products to China. North Korea has plans to develop this area with a focus on agriculture, tourism and trade and plans on attracting $24 million to the project. That is the largest investment goal among the zones.

The Waudo Export Processing Zone is located in Nampo, a coastal city near Pyongyang. Pyongyang is only 40 kilometers (25 miles) away, and the Pyongyang International Airport is only 60 kilometers away. North Korea has chosen to place export-oriented manufacturing and processing plants in this location.

The Hyondong Industrial Development Zone, which is close to Wonsan, Gangwon, wants to attract Japanese investment.

Foreign companies and investors have reason to tread carefully, however.

Xiyang Group, a Chinese minerals firm, invested in the development of the Musan iron mine in North Hamgyong. When North Korea unilaterally increased the tax on resources by 25 percent, the Xiyang Group found itself at a disadvantage and quit mine operations.

In the aftermath, the Xiyang Group even released a document entitled “Reasons Not to Invest in North Korea” online.

“They blocked the entrance of foreigners following the Ebola virus outbreak,” said Andray Abrahamian, executive director of Singapore-based Choson Exchange, a company that educates and invests in North Koreans. “These were unilaterally decisions. This lack of communication is stressful to foreign investors.”

Investors must be fully aware of what sort of place they are choosing to operate in.

“Companies already in North Korea entered with full knowledge of the instability of North-South relations,” said Im Eul-chul, a professor at Kyungnam University.

“But increasing cooperation and investment in North Korea is also a way for North Korea to manage its unstable elements,” Im added.