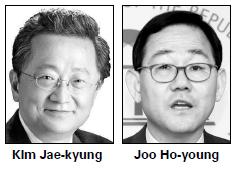 The ruling party decided Monday to name Rep. Kim Jae-kyung, a three-term lawmaker, as the chairman of the National Assembly’s powerful special committee on budget and accounts.

It also decided to name Rep. Joo Ho-young, who competed against Kim for the post, as the chairman of the Intelligence Committee.

Despite the party’s efforts to avoid a vote and seek a compromise over the three-day weekend, Kim and Joo were unwilling to yield their candidacy even after the party’s floor leaders attempted to mediate.

Joo, however, eventually ended up conceding and announced his decision Monday afternoon.

It is customary for the ruling party to determine the Budget Committee chairman without hosting an election.

The Budget Committee chairmanship is a popular and influential post because it offers a certain amount of authority over how the National Assembly’s funds are allocated. It is also expected to have an impact on next year’s general elections.

Joo, 55, is a three-term lawmaker from Suseong B of Daegu and a member on the National Defense Committee and the special committee to reform the pension system for government workers.

Kim, 54, a three-term lawmaker from the Jinju B district of South Gyeongsang, is chairman of the special committee on ethics and a member of the Legislation and Judiciary Committee.

Joo had insisted that he was promised the Budget Committee chairmanship this year by Saenuri leaders in the 19th National Assembly last year.

He missed out on his chance last year, he said, because he was serving as the chairman of the Policy Committee at the time.

Kim, however, pointed to the custom of an individual serving one year as chairman of the Ethics Committee, which lacks popularity, and one year as the head of the special committee on the budget that, by contrast, is immensely popularly.