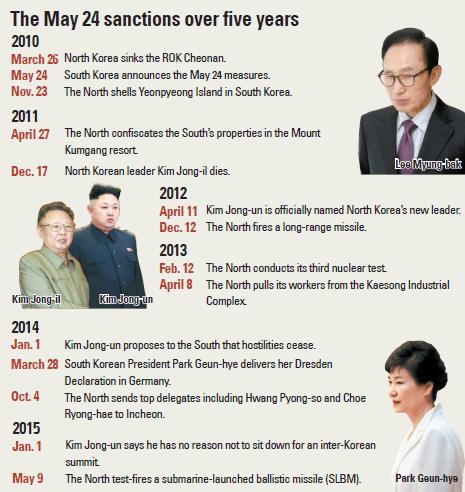 On May 24, 2010, a stone-faced President Lee Myung-bak stood behind a podium at the War Memorial of Korea that honors those who perished in the 1950-53 Korean War. With tears in his eyes, he declared the beginning of a package of economic sanctions against Pyongyang in retaliation for the sinking of the Cheonan warship just two months before that killed 46 South Korean sailors.

“North Korea will pay the price for what it did,” Lee warned, referring to its responsibility for the fatal incident. “To hold the North accountable, I will take steps required of me [as the commander in chief].”

Under those restrictions, known as the May 24 sanctions, all inter-Korean business cooperation was halted with the exception of the Kaesong Industrial Complex, the last vestige of inter-Korean cooperation.

The South Korean government also banned new business investments in the North, aside from economic aid toward humanitarian causes, and prohibited North Korean vessels from passing through South Korean waters. The package of sanctions was put in place to make clear the government’s resolve to receive an apology and assurance from Pyongyang that it would never carry out such a deadly provocation again.

But over the past five years, the May 24 sanctions have served as a major roadblock to a breakthrough in tense bilateral relations between the two Koreas. The North refuses to apologize, let alone acknowledge its responsibility.

Since the sanctions took effect, both Koreas have also seen handovers of power.

Kim Jong-un came to power in December 2011, following the death of his father, Kim Jong-il, while Park Geun-hye succeeded Lee with her own conservative administration.

According to the Ministry of Unification, Seoul’s humanitarian aid to North Korea plummeted to 19.5 billion won ($17.7 million) compared to 67.1 billion won in 2009, affected by the sanctions and subsequent tensions.

Inter-Korean trade volume, however, hit a record high of $2.34 billion last year, but an overwhelming 99.8 percent of it was via the industrial complex in Kaesong.

Now in its third year in office, the Park government has sought to improve ties with North Korea, with 2015 considered an optimal year for it in the absence of any major election. But the North has insisted that sanctions must be removed first before there can be any sort of reconciliation, a demand that has only perpetuated the gridlock.

“It takes two hands to clap. But current inter-Korean relations lack those hands now,” said an official at the Unification Ministry who requested anonymity.

While the South has kept the sanctions in place in the hope that the restrictions will deter the North from acting out further and it possibly induce an apology, Pyongyang has showed no signs of backing down.

It added that the “South must lift the sanctions for North-South relations to recover.”

The Blue House has not responded to the North’s proposal but is expected to rebuff it.

The stalemate between the two also centers on disputes ranging from whether to hold reunions for the families separated by the war or to resume the Mount Kumgang tours that have now been suspended for seven years. Taking those situations into account, calls have grown for Seoul to more actively engage with the North.

“The Park government will not lift the sanctions without an apology from the North for the sinking [of the Cheonan] because it is the successor to the conservative Lee government [that first imposed the restrictions],” said Koh Yu-hwan, a North Korea studies professor at Dongguk University.

“But it should try to draw the North to come to the table to discuss inter-Korean issues by creating the kind of conducive atmosphere demanded by the North, specifically by banning leaflet campaigns [by civic groups] critical of the regime.”

The professor noted that banning the leaflets, which multiple civic groups have launched across the border using balloons, lies in accordance with a bilateral agreement drawn up in 1972 that prohibits the two sides from mutual slander.

Still, the prospects for improved ties dimmed since South Korea’s intelligence agency released a report regarding the North’s execution of its Defense Minister Hyon Yong-chol, who was allegedly sentenced to death for disrespecting Kim Jong-un.

President Park called the alleged execution, suspected to have been carried out with an anti-aircraft gun, an act of extreme terror, which drew strong protests from the North and left the government little room to seek a breakthrough in relations.

The North’s successful test-fire of a submarine-launched ballistic missile also did little to ease tensions on the peninsula.

One North Korean expert, who spoke on the condition of anonymity, said Kim was likely to “put more high-ranking officials on death row in the coming months and years” in a bid to tighten his grip on power.

“Under this mood, which has been defined as a reign of terror, the military would have no choice but to scramble to demonstrate their loyalty to Kim. And that will inevitably undermine the logic and rationality of North Korea’s policies.”