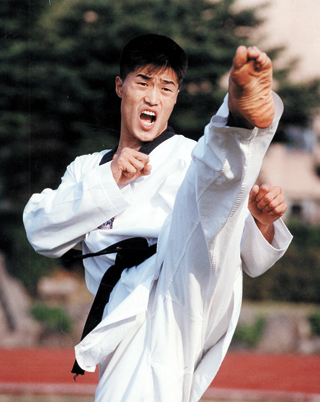 As the birthplace of taekwondo, Korea has ruled the sport, winning than 200 medals in the World Championships and 12 in the Summer Olympics, more than any other nation.

At the 2015 Worlds that wrapped up last week in Russia, the Korean women’s team won the overall title with three gold medals, but the men’s team turned in its worst performance ever with one gold and one bronze.

What makes old taekwondo fans sad is Korea losing its power in the men’s heavyweight division, traditionally a gold-medal mine for the country.

Kim Kyoung-hun, Moon Dae-sung and Cha Dong-min won gold medals in the 2000, 2004 and 2008 Summer Games and became national heroes before the Olympic winning streak ended in 2012 in London. 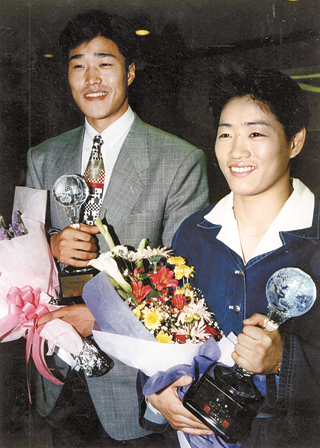 Kim Je-kyoung and judoka Jung Sung-sook won the fair play award given by the Korean Olympic Committee and the JoongAng Ilbo in 1995. [JoongAng Ilbo]

But the taekwondo practitioner who paved the way is Kim Je-kyoung, who dominated the world scene in the 1990s to the point where he was known as the “emperor of Taekwondo.”

His honors include three World Championship and three Asian Championship titles, as well as two gold medals in the Asian Games. He also won the Olympics in 1992, when taekwondo was a demonstration sport.

Although there is disagreement over whether his 1992 victory should be included because taekwondo wasn’t an official Olympic sport until 2000, many consider the 45-year-old Kim to be the de facto first taekwondo practitioner to achieve a grand slam as a heavyweight, a weight class in which Asians were thought to be less competitive.

Kim, who was the youngest of four brothers, learned taekwondo when he was in fifth grade at Byeongyoung Elementary School in 1982.

According to report from Hoochoo.com, a local sports webzine, Kim’s grandfather was good at ssireum (Korea traditional wrestling), while his three elder brothers were also good sportsmen, although none played sports for a living.

Unlike other legendary sportsmen, the young Kim did not stand out from the crowd. Through high school, he was one of several good taekwondo fighters in his age group. As there was no exceptional trophy or national team records, the Ulsan-born Kim had a difficult time gaining admission to college as a taekwondo athlete.

Elite sports schools like Korea National Sport University were not even an option for Kim, so he eventually settled on Dong-A University in Busan and then transformed himself from a middleweight into heavyweight fighter.

According to Kim, he suffered a severe lower back injury and his parents urged him to quit the sport, but Kim Woo-kyu, who was then head coach of the Dong-A University taekwondo team, persuaded Kim’s parents to allow him to continue. He started weight training as a part of his rehabilitation program.

Kim said he stood about 181 centimeters (5 feet 11 inches) when he entered the university, but by the time he graduated he had grown an additional 7 centimeters.

As a heavyweight, Kim started to dominate the scene in 1991, winning domestic events like the President’s Flag and National Sports Festival, and international events like the 1992 Olympics, World Championships, Asian Championships and Asian Games. At one point, he had more than 80 consecutive wins.

With his powerful back and round-house kicks, Kim rose to the top of international taekwondo, along the way suffering a series of knee and thigh injuries. In 1996, he had surgery to remove bone chips from his knee.

After defending his gold medal in the 1998 Bangkok Asian Games, Kim prepared for the 1999 Worlds, but in the national team selection competition he was surprisingly beaten by his young teammate Moon Dae-sung. Apparently, a thigh injury suffered in the Asian Games was a factor.

While many thought Kim’s career was on the decline, he set a new goal to win the gold medal at the 2000 Summer Olympics in Sydney, where taekwondo would be an official sport for the first time.

Kim’s young rivals Kim Kyoung-hun and Moon Dae-sung withdrew from the national team selection competition so the three-time world champion would be chosen.

But his thigh injury stopped him from going for the gold. Just three months after winning the national team selection competition, Kim relinquished his Olympic slot.

“It’s not important who competes in the Olympics,” he said at the time. “What’s important is that we send a player who can really honor the country as the birthplace of taekwondo. I want to see my young teammates honor our country.”

Kim Kyoung-hun won the heavyweight title in the 2000 Summer Games, while Moon Dae-sung was victorious in 2004 in Athens.

Just after the 2000 Summer Olympics, Kim retired and went to the United States, declining several coaching offers. At first, Kim just wanted to study English, but he eventually settled in Portland, Oregon, where he opened taekwondo schools and met his future wife. They married in 2004.

What made Kim special in the taekwondo world was not only his dominant performances, but his gentle and polite attitude. In the 1995 U.S. Open Taekwondo Championship, when the Korean national team provoked other teams, it was Kim who stepped up to defuse the situation. As a result, others praised his manner as representing what taekwondo was meant to be.

“I’ve enjoyed my life doing taekwondo for 20 years,” he said. “The Sydney Olympics remains a great regret, but I still think it was a good decision to let my young teammates compete.”