Magnus proud to wave Taegeukgi in 2018

Magnus proud to wave Taegeukgi in 2018 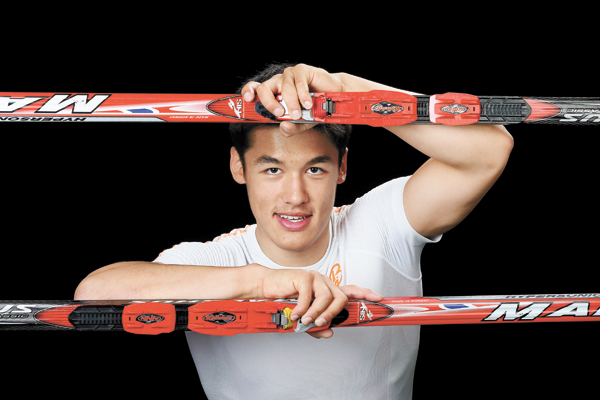 Kim Magnus shows off his skis in Seoul on May 11. The 16-year-old, who holds dual citizenship of Norway and Korea, will compete for Korea in the 2018 PyeongChang Winter Games. Photo by Oh Jong-taek

Cross-country skier Kim Magnus says he plans on winning a gold medal at the 2018 PyeongChang Olympics. But until last month, it wasn’t clear which national anthem he wanted to hear when he took the podium.

The 16-year-old top prospect is a dual citizen of Norway and Korea, with a Norwegian father and a Busan-born mother. Kim, whose Norwegian name is Magnus Bøe, had a tough time deciding where his allegiances would lie.

Under the International Olympic Committee rules, athletes with dual citizenship can compete for only one country they’ve represented in the three years prior to the Olympics.

But last month, he made the decision to represent his mother’s country.

“After I made my decision, I was relieved,” Kim said in an interview with the JoongAng Ilbo on May 11. “From now on, I can just focus on the Games.”

The 178-centimeter (5-foot-10) skier said he’s proud to be Korean, and that his family and friends supported his decision to represent the country.

The Korea Ski Association has allowed Kim to stay in Norway, where the environment is more conducive to cross-country skiing.

“It’s rare to be able to participate in an Olympics held in your home country, and I didn’t want to miss out on that,” he said. “I also want to help develop skiing in Korea.”

Although his appearance may be different from the typical Korean, Kim was born and raised in Busan, and uses the dialect of the southern port city. He said he was moved by movie “Ode to My Father” which depicts old Busan, and says he loves Korean cuisine.

“I think Korean food is the most delicious,” he said. “After I eat one bowl of ugeoji gukbap [napa cabbage soup with rice], my fatigue just disappears.”

PeyeongChang won’t be the first time that Kim has represented Korea, however. Back when Korea co-hosted the 2002 FIFA World Cup, Kim was one of the children who performed at the festivities the night before the opening ceremony.

“My mother knew a person who organized the hanbok [Korean traditional clothes] fashion show, so I was able to go up on stage,” he said. “The PyeongChang Olympics is the next big sporting event hosted by Korea since the World Cup, so I’m thrilled I can now participate as an athlete.”

Kim’s mother said that her son was naturally active and played any sport he could.

“When Magnus was 4 years old, he saw a really muscular man on the television and asked, ‘What should I do to be like that?’” she said. “He really liked to move around, so we got him started with taekwondo.”

Kim moved on to sports like football, wind surfing, sailing, triathlon and ice hockey, but he found his niche with short-track speed skating and cycling.

When he was in the second grade, Kim said he learned short-track from Chun Lee-kyung, who won four Olympic gold medals in the sport. He even went on to win the 500-meter event at the national short-track competition for juniors.

As for cycling, Kim biked between Busan and Seoul - more than 400 kilometers (249 miles) - when he was in the fifth grade.

“Short-track helped me develop mental strength, and cycling taught me how to enjoy exercise,” he said. “I just like the most basic aspect of sports: When you work hard and practice good sportsmanship, you can get good results.”

Kim took up skiing in 2010 when he followed his father to Norway, but soon found he was up against stiff competition.

“People in Norway start skiing when they’re kids,” he said.

In his first national ski event in Norway, Kim was 46th among 330 skiers. By 2012, however, he emerged as one of the country’s top young skiers. In 2013, he was No. 1 among 280 skiers at the Norwegian cross-country classic sprint for the under-15 age group. Last March, he also topped the 1-kilometer cross-country sprint event.

From 2013, Kim also produced impressive results in the biathlon, which combines skiing and shooting. Just eight months after taking up the sport, he went on to win the junior biathlon championship in Norway last April.

His successful run wasn’t happening only in Norway. At the National Winter Sports Festival, held in Gangwon this February, Kim bagged four gold medals in the cross-country and biathlon events. At the classic 10-kilomter cross-country event, he clocked 25 minutes 24.7 seconds in the high school division, which was faster than the best finishes in the college division (25 minutes 55.2 seconds) and adult division (26 minutes 39 seconds).

Despite his biathlon successes, Kim said for the Olympics he will focus on cross-country skiing - the event in which only European countries have ever won gold.

If he wins, Kim will also be the first multiracial Korean athlete to earn the sport’s top prize.

“I really want to stand on the top of the world at the PyeongChang Olympics,” he said.