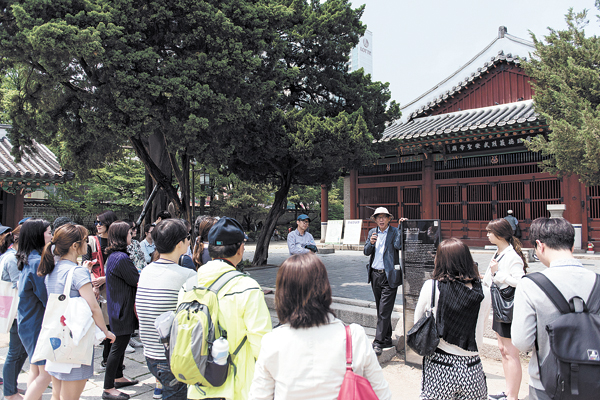 Yoo Hong-joon, a professor at Myongji University, is seen explaining to participants the importance and history of Changsin-dong. In this photo, he talks about Dongmyo Shrine, one of the cultural heritage sites in the area. [JoongAng Sunday]

Changsin-dong, central Seoul, was a special place for Park Soo-keun (1914-65), one of Korea’s most beloved modern painters.

He called the neighborhood his second home after his birthplace, Geumseong in Gangwon. In the former area he miraculously reunited with his family, who had remained in North Korea while he fled to the South during the 1950-53 Korean War.

Park committed the rest of his life to art. Everything he saw and felt while wandering around the neighborhood can be seen in his work.

One of the many reasons the special exhibit commemorating the 50th anniversary of his death is being held at Dongdaemun Design Plaza is because the venue is located right next to Changsin-dong.

Visitors can view 50 of Park’s pieces at the Yigansumun Exhibition Hall. But what is more interesting is that the organizers have used the Changsin-dong area, its alleyways and the artist’s work space as an exhibition as well, which organizers say was a bold move. 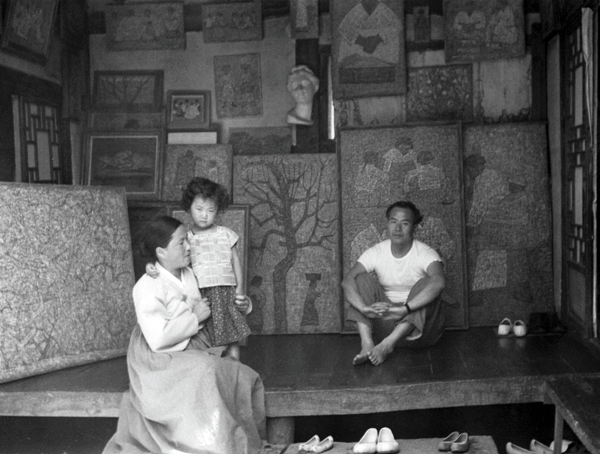 In this file photo Park Soo-keun (1914-65), sits on the floor of his house in Changsin-dong, central Seoul, with his wife Kim Bok-sun and his daughter In-ae, who died when she was 11 years old.[JoongAng Sunday]

A two-hour field trip will be held starting at 11 a.m. every Saturday from May 9 to June 27, encompassing varying themes such as “Urban Regeneration“ and “The Past and Presence of the Sewing Industry in Changsin, Dongdaemun.”

The JoongAng Ilbo, an affiliate of the Korea JoongAng Daily, went on the first tour, which was led by Myongji University Prof. Yoo Hong-joon, former head of the Cultural Heritage Administration.

“According to history, the east side of Korea was weaker than the west side,” Yoo said. “Perhaps because ancient Koreans believed Mount Naksan [located in the east] has less influence than Mount Inwang [located in the west], people tried to protect Heunginjimun [another name for Dongdaemun, or the East Gate] by building a castle around it.”

Today, Dongdaemun remains the only gate surrounded by a castle among the four main entrances of old Seoul. Nevertheless, it was not enough to prevent enemies from breaking in during the 1950-53 Korean War.

Yoo, the author of the best-selling “My Survey of Cultural Heritages” series, noted that it is also interesting how both rich and average Koreans lived side by side in this area due to geographical reasons.

Those who fled from the Communists, including Park, settled here.

But wealthy individuals such as Nam June Paik (1932-2006), the internationally renowned video artist, were also born and raised in the area.

“As we can understand the time period of King Yeongjo and Jeongjo through the works of Kim Hong-do and Shin Yun-bok [the most well-known painters of the Joseon Dynasty (1392-1910)],” Yoo explained, “Park and Paik’s works give us the idea of the 20th century.”

Changsin-dong changed much as time went by and as Korea underwent rapid industrialization and urbanization, but some traces of Park’s paintings can still be found.

Case in point: Park In-suk, the oldest daughter of the artist and the real-life inspiration for “A Girl Tending to an Infant” (1954), reflected on carrying her younger brother on her back during her childhood while on the tour. 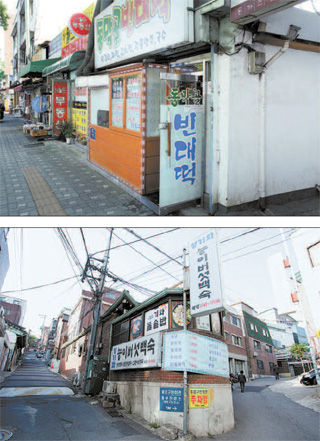 Top: The street where Park Soo-keun’s house once stood. Only the drainpipe remains untouched. Above: Where renowned video artist Nam June Paik (1932-2006) was born and raised, part of it now houses a chicken soup restaurant.

“Every time my father’s work sold, I was so happy that I could eat rice that day,” Park said while standing in front of the workspace.

“Otherwise, my family survived on clear soup with dumplings or bean-sprout soup.”

She recalled the old times while standing in front of Dongshin church, where her family used to attend services.

“My father was tone deaf but good at playing the harmonica. When I hear ‘Cuckoo Waltz,’ I still think of him. Singer Cho Young-nam also went to the same church as us. When he sang hymns, it literally moved me and quenched my spirit.”

The building that now houses a bindaetteok (mung-bean pancake) restaurant and a real estate agency was once Park’s home and workspace. The artist used to sit on the floor watching his children romp around while he painted his wife pounding and grinding grain.

Yoo wrote on the building’s drainpipe, the only object that remains untouched at the site, “A house where painter Park Soo-keun lived.”

“Due to financial reasons, Park worked on small pictures rather than big ones,” Yoo explained.

“His painting technique of using thick textures and the feeling of stone is set in the 1960s. It is very artistic, like religious pictures, and gives peace to my mind.” 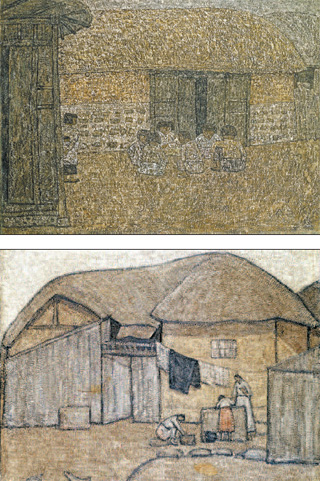 As 10 years passed, his lines became thinner and the feeling of texture changed.

The market area Park used to draw is now a toy market, full of children grabbing toys in one hand and their mother’s hand in the other. It is hard to see female street vendors selling fruit or carrying round baskets on their heads, any longer.

“Most men died in the war or worked abroad, which is why we could easily find women working at laundry places or markets in his paintings,” explained Lee Hyun-mi, a tour guide. “I feel attached to them as I can see the hardships they went through to earn a living.”

Yet the artwork “My eldest Son, Park Sung-nam” (1952) was drawn after Park reunited with his real son. It represents all the children of the time who were lost and then found, critics say. Most of Park’s works represent Koreans living through that tumultuous era.

The group finally arrived at the site of the house where Paik was born, which is just 500 meters away from Park’s workspace. The lot is now divided into 22 houses.

Yoo recollects memories of seeing Paik standing in front of a sign on the wall of a chicken soup store, which had “The house of artist Nam June Paik” written on it.

“In the 1970s, we had no TV in our house, so I thought Paik was the inventor of videos when I read about his video art in the newspaper,” he said. “It turned out I was wrong when I participated in the celebration of his 60th birthday held at the National Museum of Modern and Contemporary Art.”

Since then the two kept in touch with each other. When Yoo heard about Paik’s death, he took the day off and went to his funeral.

“There’s a saying that when people are near their death they return to the place where they were born,” Yoo explained.

“Paik said he wanted to go back to Changsin-dong in his latest interview as well. He missed the town so much and his childhood memories, but the visit in 1988 was his last.”

“Changshin” originally means prosperity and faith, but the exhibition organizers used the other meaning for it - refreshment - hoping the neighborhood of artists such as Park will be rediscovered and re-evaluated by the people of today.

“I hope my father’s beautiful pieces of work, which have memories of old times, can sow seeds and make sprouts,” said Park In-suk after touring the area.