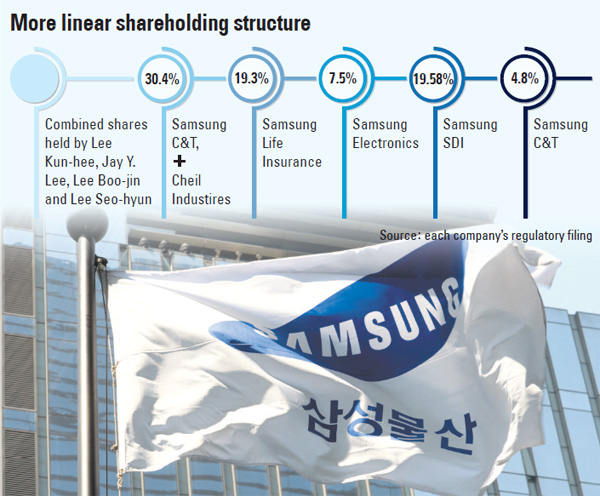 Cheil Industries, Samsung’s de facto holding company, agreed to acquire Samsung C&T, the group’s construction arm, on Tuesday in what many see as the latest move to smooth the leadership transition from ailing chairman Lee Kun-hee to his son Jay Y. Lee.

Under the agreement, Cheil Industries, whose interests encompass fashion and leisure businesses, will offer 0.35 share for each Samsung C&T share and complete the takeover by Sept. 1.

The combined company will use Samsung C&T as its brand name, according to a regulatory filing released by Cheil Industries.

The filing said the merger would result in synergies, but analysts believe the move is primarily aimed at helping the son extend influence over the group by merging the construction affiliate with Cheil, whose largest shareholder is the younger Lee. With a 23.2 percent stake in Cheil Industries and 0.57 percent in Samsung Electronics, the heir apparent serves as vice chairman of Samsung Electronics. After the merger, the younger Lee’s share in Cheil will be reduced to 16.5 percent, but he will be the largest shareholder of the new company.

The move is in line with analysts’ forecasts that Samsung will centralize its complex web of cross-shareholdings around major affiliates Cheil Industries, Samsung Electronics and Samsung Life Insurance to help Lee’s three children - and especially the son - better exert influence and efficiently manage diverse businesses.

“This is a part of efforts to simplify the ownership structure in order to shift power to the next generation,” said Greg Roh, chief researcher at HMC Investment Securities.

“The merger can make the ownership structure simpler and more linear, which in turn helps the son manage different business in affiliates more easily.”

Currently Cheil Industries owns 19.3 percent in Samsung Life Insurance and Samsung C&T owns a 4.06 percent stake in the group’s flagship Samsung Electronics. Once the merger is completed the new company will own both stakes in Samsung Life Insurance and Samsung Electronics. This is expected to not only enhance Jay Y. Lee’s control over two major companies within Samsung Group but simplify the governing structure.

Once merged, the new Samsung C&T will own a 4.06 percent stake in Samsung Electronics, which makes it the second-largest shareholder of the smartphone and computer chip manufacturer, the jewel of the Korean conglomerate with the largest market capitalization on the benchmark Kospi.

Samsung Life Insurance has a 7.21 percent stake in Samsung Electronics.

The Lee family including Chairman Lee, his son and daughters Lee Boo-jin and Lee Seo-hyun will hold a combined 30.4 percent share in the new Samsung C&T.

Some analysts expect business advantages that come along with the merger. “Cheil Industries’ resort business might jibe with the construction division of Samsung C&T, as the two businesses are related,” said Roh.

The two companies also cited the benefits they expect, though in a vague manner.

“The merger is intended to strengthen competitiveness in order to boost our presence around the globe,” said Yoon Joo-hwa, the CEO of Cheil Industries.

“[The combined company] will become a leading company that provides services closely linked with lives of people.”

Choi Chi-hun, president and CEO of Samsung C&T, highlighted the diverse business portfolio that will result from the deal.

“[We] will secure growth engines by having a wide-ranging business portfolio including fashion and bio businesses,” Choi said. “We plan to leverage Samsung C&T’s strength in operating businesses globally and Cheil’s expertise in developing niche markets based on differentiation.”

Some observers focused on the fact that the new Samsung C&T will become the largest shareholder of Samsung Biologics with a 51.2 percent stake.

The group has reiterated that the bio industry is a new promising segment of business.

Samsung Biologics has entered into partnerships with Bristol-Myers Squibb and Roche in its plant in Songdo International Business District. The company has completed a second plant in the district where test operations are underway.

The merger is the latest sign of the younger Lee gaining power as the older Lee remains hospitalized after he suffered a heart attack last May.

Most recently, Samsung Group announced that the son will serve as chief director of the Samsung Foundation of Culture and Samsung Life Public Welfare Foundation, replacing his father.

The two foundations are considered important parts of Samsung’s complex shareholding structure since they hold shares in key affiliates.

The company also conducted IPOs of its affiliates including Samsung SDS and Samsung Everland.

As the listings were underway, the company sold businesses that it deemed not profitable. In April, Samsung sold stakes in four chemical and defense firms including Samsung Techwin for 1.9 trillion won ($1.7 billion) to affiliates of Hanwha Group.

It sold a 32.4 percent stake in defense firm Samsung Techwin to Hanwha Corp. for 840 billion won.

Analysts saw the sales as a way of raising money to pay inheritance taxes that are expected to amount to 6 trillion won. The authorities will likely levy a tax of up to 50 percent on assets the three children inherit from the elder Lee, who is estimated to have some 12 trillion won.

The value of shares owned by the three children increased threefold between 2014 and 2015, according to CEO Score.

After the news of the merger, both Cheil Industries and Samsung C&T saw their stock values hit the daily limits. The group’s flagship Samsung Electronics saw its shares advance 0.89 percent to close at 1,362,000 won. Other affiliates including Samsung SDS and Samsung Life Insurance saw their stocks prices increase as well.