[Cooking with Her Excellency, Azerbaijani] Something sweet from the Land of Fire

[Cooking with Her Excellency, Azerbaijani] Something sweet from the Land of Fire


Every great capital has a diplomatic corps representing their countries and promoting their own cultures. Ambassadors are expert entertainers and their spouses are often skilled at introducing the cuisine of their homeland to their foreign hosts. In this series, the Korea JoongAng Daily asks the spouses of Seoul’s ambassadors to introduce our readers to a favorite entree from their homelands. In each installment, her excellency will be joined by a chef from the Grand InterContinental Seoul Parnas who prepares a Korean dish that complements the foreign offering. Mashitgedeuseyo, nu? olsun and bon apetit!

Marrying an Azerbaijani diplomat immediately after graduating from college launched Konul Teymurova on a fast track to a life of foreign service.

The years flew by as she juggled roles as a mother of two sons and as the wife of an envoy, contemplating better ways to promote her country, nicknamed the Land of Fire.

But when Teymurova arrived in Seoul a couple of years ago, it was more than the skyscrapers and high-rise apartments that grabbed her attention.

“I’ve heard a lot about the prestigious Korean education,” she said. “I want to make the best of my experience here, hopefully by later returning to my country with a master’s degree, maybe in marketing or management.”

As the first to introduce a dessert to this cooking series, Teymurova whipped up what she considers a traditional sweet that is lately gaining popularity at local bakeries in Itaewon, central Seoul.

Q. Why did you choose pakhlava as today’s dish? 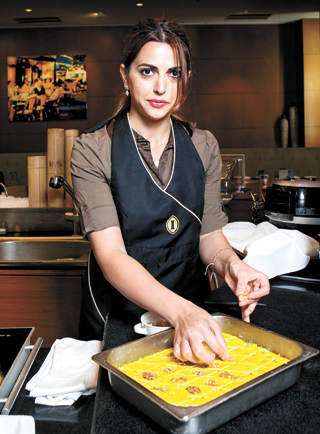 Konul Teymurova, wife of the Azerbaijani ambassador to Korea, prepares the traditional dessert pakhlava at the InterContinental Seoul COEX in southern Seoul earlier this month. By Park Sang-moon

A. I see an increasing number of pastry shops in Seoul nowadays, which goes to show the rising interest of locals in bakers’ confectionery. Thus, I decided to introduce pakhlava - sweet layers of nuts and sugar, cut in a rhombus shape - to the Korean public. Pakhlava is one of the main attributes of Azerbaijani cuisine, and is often enjoyed during Norvuz, a traditional holiday celebrating the arrival of spring. I must mention that in the past, the goods were mainly baked over wood fires, and people used honey instead of sugar. The dessert itself symbolizes a star, femininity and fertility.

Is this dessert often served on your national Republic Day, too?

Azerbaijan celebrates the 97th anniversary of Republic Day on Thursday, and the Azerbaijani Embassy in Seoul will host a reception the day before. In commemoration of the national holiday, the embassy usually presents various samples of Azerbaijani cuisine, like pilov with ashgara, dolma, baligsirdagi and, of course, pakhlava.

It was in 1918 when the country gained independence from the Russian Empire, and became the first democratic parliamentary republic in the Muslim East. Although it became occupied by the Soviet forces only two years later, it was during that time when Azerbaijan made numerous accomplishments in state-building, education, economy, universal suffrage and armed forces. Azerbaijan regained independence in 1991 and successfully continues its statehood based on the finest democratic traditions.

The art of cooking in Azerbaijan dates back centuries. Three sides of the country are surrounded by mountains and the rest is washed by the moist breath of the Caspian Sea, giving the country a unique geographical layout. Having nine different climate zones means Azerbaijan has developed a wide variety of food cultures, too. Azerbaijani cuisine is composed of around 2,000 dishes, most of which incorporate lamb, beef, fish and poultry. 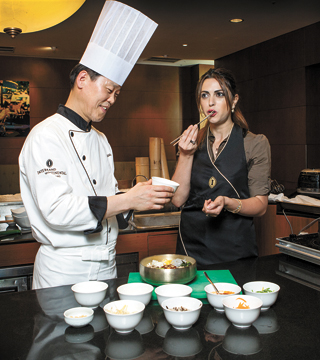 Local spices such as saffron, cumin, fennel, bay leaf and coriander are widely used, as well as herbs like spinach, mint, dill, parsley, celery, tarragon, basil, savory and thyme. Dried fruits such as apricots, plums, raisins and sour cherries are a special part of the national cuisine. Abgora (a type of vinegar made from unripe grapes), narsharab (pomegranate sauce), plum paste, yogurt garlic sauce and sumac are often added on foods as a final touch, depending on the consumer’s desire.

Dovga, a soup made out of plain yogurt and various herbs, is a nutritious, popular dish that may be served hot or cold.

Meals cooked with minced meat are also widely enjoyed in the country, and I personally find it gratifying that many people prefer old-style tools like stones and wood over electric machinery when preparing the ingredients. I think such culinary styles add a flavorful texture modern technology cannot match.

Kebab in Azerbaijan has a distinct taste and flavor compared to those from other countries, due in part to organic grass-fed animals and sophisticated cooking techniques. Especially those involving fish, vegetables and lamb meat will enable you to understand the stark difference.

There are many kinds of pilafs topped with different of toppings, including meat, herbs, dried fruits and nuts. Pilaf itself is considered the king of main dishes, and therefore served at the very last.

Tea is another part of Azerbaijani culture, as people always find a reason to gather around the table for a cup of tea served with fruit jam or sweet pastry. Black tea with thyme is one the must-haves.

What Azerbaijani ingredients are hard to find, and where can you source them?

I’ve had trouble spotting small, young grape leaves here, so I personally bring them from my native country. Some other fresh herbs I purchase at international markets. 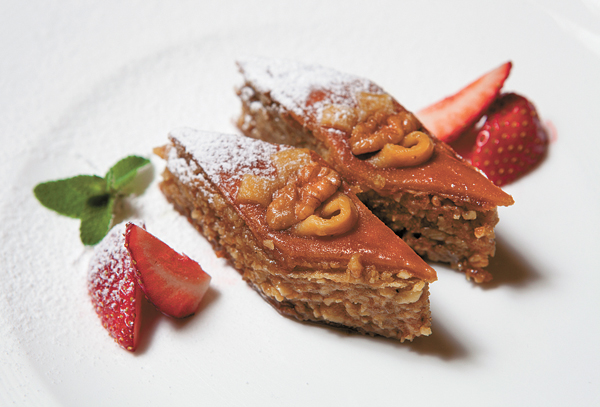 My cooking habits are almost the same because I prepare mostly my national foods and the cooking methods require an original approach. But at the same time, I try to use local ingredients like sesame oil or herbs from the supermarkets here. I prefer purchasing my vegetables from small stores as they are more natural and rich in taste.

What Korean dishes are you fondest of?

Bibimbap (rice with mixed vegetables) and galbi (barbecued short ribs) are my favorite dishes. I like bibimbap especially due to its lively, colorful ingredients. The way Koreans eat galbi is very interesting because bites of grilled meat are wrapped in greens and eaten together.

The side dishes offered in local restaurants showcase a sense of richness of Korean cuisine. Kimchi is one of my most favorite side dishes, and my entire family favors it so much that we request plates of it when it’s not being served. Overall, I find Korean food very healthy.

Please give us your personal observations about Korea, how it compares to Azerbaijan or other countries in which you have lived.

From the first day I arrived in Korea, I fell in love. For me, the country is dynamic with positive people and amazing natural settings. What was especially eye-catching was how people treat, greet or say their farewells, depending on each other’s ages. I found many cultural similarities between Korea and Azerbaijan, especially in family traditions or how people respect their elders. 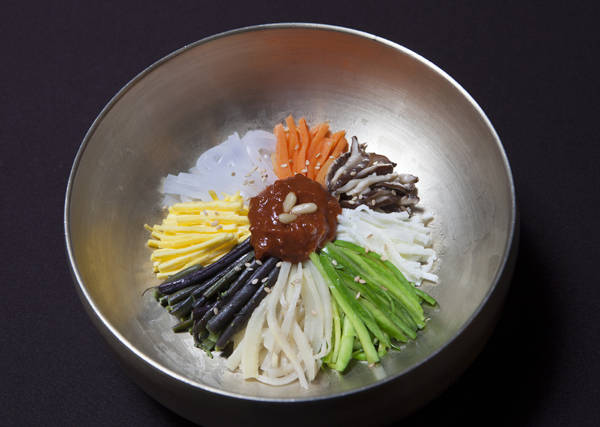 Gyeongbok Palace, Namsan Park, museums and even congested streets are my favorite places in the capital - venues I recommend to visitors. Our residence is in Seongbuk-dong, northern Seoul, so I should definitely mention its mountains, which I believe are great for family hiking during spring.