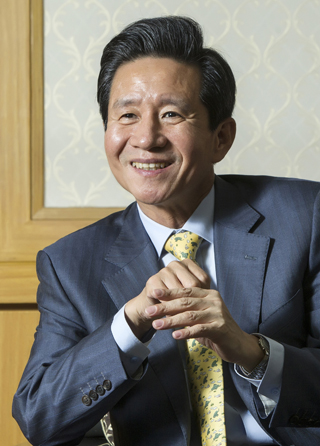 Korea Polytechnic University (KPU), located in the country’s largest industrial complex in Siheung, Gyeonggi, has made a full use of its surroundings since its establishment and gone on to become one of the most compelling schools in the capital area, serving as an outlet for cooperation across local industries.

Founded in 1998 by the Ministry of Commerce, Industry and Energy to provide customized employees to local small and medium-size enterprises (SMEs), the employment rate among the school’s graduates has ranked highest among universities in Seoul and Gyeonggi for five consecutive years, from 2010 to 2014.

“I believe cultivating hidden champions with technical skills and globally competitive products, like those in Germany or Japan, will be the way to prepare for the next 20 to 30 years in our industry,” said KPU President Lee Jae-hoon, referring to typically smaller companies that have achieved success without much fanfare. “While we sought industry-academia cooperation in the past, I think now we need to have university-industry convergence, combining the two bodies together.”

Last week, Lee Jae-hoon sat down with the Korea JoongAng Daily to talk about which path the university would pursue to keep up its competitive edge, specifically its new University-Industry Convergence 3.0 Initiative.

Last year in its annual university evaluation, the JoongAng Ilbo selected KPU as the No. 1 school for its contributions to the country and local community as well as in the growth potential category. It was also chosen by the DongA Ilbo in its evaluations for 2013 and 2014 as one of Korea’s top 10 universities.

Q. Why do you think KPU has achieved so much in such a short period of time?

A. After setting the general purpose of the university as providing personnel to SMEs, we’ve applied empirical studies in every way. When we employ professors, for example, they need to have not just doctorates, but also seven or more years of field experience so that they can teach not just theories but also what happens in the real world.

Students are also required to have more credits for graduation. They need 150 credits to graduate, while other schools usually require around 130, and they are required to have eight credits of field training and to do a capstone over what they have learned over the last four years.

What are the key features of KPU’s University-Industry Convergence 3.0 Initiative?

The principle of the new initiative is to let the university and the industry share values, people and space.

The first step was to set up the School of Applied Industrial Technology, where for the first time in Korea, employees from local companies, especially R&D personnel, come and study. Currently, there are about 700 students.

We also established a research center for manufacturing technology innovation, which is also unprecedented in Korea. We’ve set up five primary fields in the manufacturing industry and let key workers from those kinds of manufacturers be trained for free over the course of four to six months.

For our two education facilities, our professors teach them and we’ve also invited researchers who have worked for a long time at large corporations.

Also, less than 8 percent of 17,000 companies in this industrial complex have their own research lab. So we are providing not just rooms but also our professors and equipment to run their researching facilities at KPU. We call it the University-Industry Convergence Center and 35 companies currently run their labs on campus. It also gives opportunities to our students to have access to research experience.

Lastly, we’ve run a Business Support Headquarters since this year, which helps students find business items, put them in a business incubator and eventually show them the entire process of making that into a new business.

What was the main reason for coming up with the new initiative?

Since I became president in February 2014, I kept questioning how sustainable our economy was with industries like shipbuilding, car manufacturing, steel and petrochemistry.

I believe cultivating hidden champions with technical skills and globally competitive products, like those in Germany or Japan, will be the way to prepare for the next 20 to 30 years in our industry.

The industrial complex here was a driving force in the country’s development, but it’s becoming increasingly outdated and losing its edge.

I think we should try to renovate and reinvigorate it, using the university’s research capacity and the experience of our distinguished professors. While we sought industry-academia cooperation in the past, I think now we need to have university-industry convergence, combining the two bodies together.

How do you keep your relationships with local companies?

We have the very unique concept of an engineering house. Professors here don’t have their own offices, but a place where professors, students and R&D personnel from local companies can work together. At the Techno Innovative Park, there are about 60 engineering houses.

It’s where students can learn about what companies actually want and experience what it’s like to work as an engineer. Local companies also can use it as an opportunity to recruit competent students. It’s how we keep our employment rate high.

We also have the Partner Company System, which encompasses more than 4,000 members. Those are companies willing to make a contribution to the university by providing job opportunities and cooperating with the university’s research efforts.

So KPU is actively working toward globalization?

I strongly insist that KPU needs to actively engage itself in globalization efforts, because Hyundai Motor, for example, has local factories in the United States and Turkey, and Samsung Electronics has one in Vietnam, but they outsource from the global supply chain. The time in which everything was supplied from the domestic market has come and gone.

In an attempt to globalize the university, I went to the Institut National des Sciences Appliquees (INSA) in Strasbourg in July and signed a memorandum of understanding (MOU). This summer, 10 students from INSA will visit KPU as exchange students, and 10 students from here will go to INSA this fall. It’s not to provide a cultural experience like other exchange student programs, but to allow them to actually get field training in a foreign country.

We are scheduled to sign another MOU with Massey University in New Zealand next month and are in talks with Dezhou University in China as well.

What’s the purpose of your globalizing effort?

We have a great field training system, but students here can’t overcome certain limitations if they stay in Korea. I wanted to facilitate their potential and one way to do that was to globalize the university.

Are you thinking of letting them work in foreign countries as well?

I definitely think they should try. It is a great opportunity because a lot of other countries are paying attention to South Korea because it’s become the world’s No. 12 or 13 in the manufacturing industry in such a short time.

Those companies are really eager to learn about our manufacturing skills and know-how.

Given KPU’s unique position, do you expect there will be other similar universities established in Korea any time soon?

I keep telling the Korea Industrial Complex Corporation and the Ministry of Trade, Industry and Energy that we have achieved our intended goals, and I have suggested applying this model to other industrial complexes as well.

I believe it needs to be handled as a project by the government or respective industrial complex.