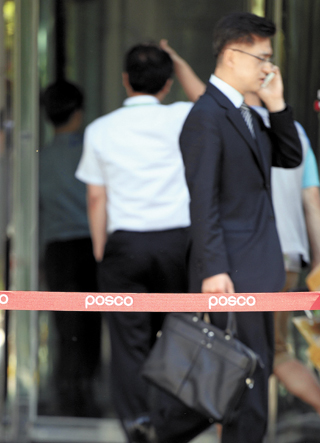 People walk in and out of Posco headquarters on Tuesday in Gangnam, southern Seoul. The board of the nation’s largest steelmaker’s affiliate Posco Plantec, which specializes in heavy industries solutions, has applied for a debt-restructuring program. The unit’s capital has eroded due to increasing deficits and massive debt, and overdue loans taken out from financial institutions amount to 90 billion won ($81.4 million). [NEWSIS]