Yen is not only factor in Japanese profits: KITA

Yen is not only factor in Japanese profits: KITA 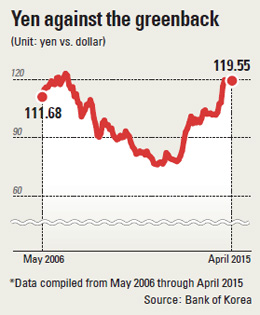 Japanese companies have been seeing huge improvements in their profitability thanks to the Shinzo Abe government’s weakening of the yen to regain export competitiveness.

But Korean trade analysts say the weak yen is not the only factor in that success.

The Tokyo Center of the Korea International Trade Association (KITA) wrote in a report released Wednesday that the profits are also the result of long efforts to change corporate structures, R&D activities and heavy emphasis on consumer-friendly marketing.

According to the KITA report, which analyzed a set of corporate profitability data compiled in March by Japanese magazine Weekly Toyo Keizai, some 530 listed Japanese companies saw their total operating profit in 2014 recover to levels higher than before the 2008 global financial crisis. At 30.4 trillion yen ($246 billion), the accumulated profit was about 400 billion yen higher than in 2007.

However, the KITA report explained that the currency was not the only factor. The Japanese currency in 2007 averaged around 117.93 yen to the U.S. dollar, slightly weaker than the average of 112 yen last year.

Since 2007, the automaker has pushed internal policies to enhance efficiency, cut production costs and changed car designs, mainly due to personnel cost increases during the same period.

Since the 2008 global financial meltdown, Subaru lowered the prices of its premium models - which in the past didn’t compete well against similar models from BMW and Mercedes-Benz - and rolled out a renewed model of its flagship Legacy by enlarging the car’s body. Both changes came after listening to U.S. consumers.

“Japanese companies have steadily strived to save money through efficient production and invested in R&D, which later became their competitive edge, along with the government’s currency policy,” wrote Kim Eun-young, managing director of the KITA Tokyo Center, in the report.

While Japanese automakers are thriving thanks to a confluence of factors, Korean companies are struggling.

The nation’s largest automaker, Hyundai Motor, has seen investors lose faith in it. Its shares on Wednesday fell 1.87 percent from the previous trade to close at 157,000 won ($141.75), and its total market capitalization fell to 34.58 trillion won. It surrendered its place as second largest company on the stock market to SK Hynix.