S-OIL toils to save endangered species in Korea

S-OIL toils to save endangered species in Korea 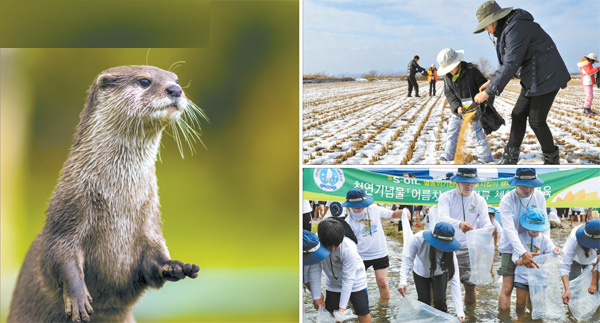 The DMZ, or the demilitarized zone, which dissects the Korean Peninsula, is regarded as the most heavily fortified border on earth, and few can cross it freely.

But it is a different story for sea otters. Thanks to their slim bodies, some of the endangered animals Korean preservationists have raised at shelters and later freed are believed to have made it through the tightly woven barbed-wire fence that separates South and North Korea.

Researchers at the Korean Otter Research Center, which opened in 2005 in Hwacheon, Gangwon, have provided homes to these small creatures rescued from all across the country before releasing them in the wild, often in the DMZ, since 2006.

Having been off-limits for decades, the patch of land has become a sanctuary for endangered species.

“Of the 10 otters that we’ve released in the DMZ area so far, we believe two might have crossed the border and settled in the North,” Kim Hyeong-hu from the Korean Otter Research Center told the Korea JoongAng Daily.

Kim explained that location tracking devices had been attached onto the otters. But the signals, which can cover up to a 3-kilometer (1.9-mile) radius, of two of the creatures could not be located, leading researchers to believe that they had entered North Korea.

Left: A volunteer program for university students to help save endangered species. Right: Longhorned beetle (Natural Monument No. 218) is the company’s latest choice in its support for endangered species. It does not have any plans as of yet to select more species.

For years scholars have believed that otters have crossed the DMZ, having found excrement from the animal near the barbed-wired fence. In 2007, experts from the South and the North signed an agreement for the joint study of the species in the area, but little progress has been made because of soured inter-Korean relations.

One of the biggest corporate sponsors of saving Korea’s otters, and other endangered species, is S-OIL, a major petroleum and refinery company in South Korea. As part of its patronage programs for culture and the arts scene, it has been financing the efforts since 2008.

Some may wonder why S-OIL’s efforts to save otters are categorized as a cultural patronage project.

The reason is because the creature is considered a state-designated cultural property in Korea.

The grouping is specifically for animals, plants, geological features, biological products or natural phenomena that carry a special meaning in terms of history, culture and science.

Jeju’s black pig hit the headlines recently when the indigenous Jeju breed was designated as Korea’s Natural Monument No. 550.

The otter, on the other hand, was labeled Natural Monument No. 330 in 1982. The creatures are endangered in Korea for several reasons, but the most evident culprit is the country’s rapid industrialization and the resulting loss of natural rivers.

“As companies execute their business activities, they often face criticism for their negative impact on the environment, like pollution and accidents,” said Jang Yeong-ki, the Cultural Heritage Administration’s special adviser on cooperation between the private and public sectors.

“It’s interesting how S-OIL is seeking to save endangered Natural Monuments, cure them and create safety nets for them,” he said. “In doing so, the company is contributing to both the preservation of cultural heritage and the environment.”

Few companies have chosen Natural Monuments as the subject of their cultural patronage, officials at the Cultural Heritage Administration said.

Hanhwa Hotel & Resorts has been helping to preserve loach near Geumgang River since last year and Harim Corporation, known for its chicken products, has been feeding fowl to eagles since 2012. 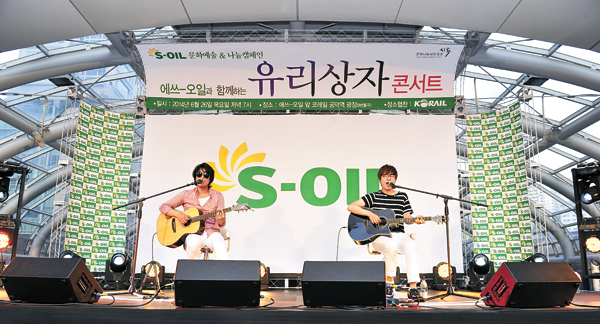 The company also holds free monthly concerts as part of its arts and culture patronage programs.

Insiders say, however, that there are no companies that have extended steady support for as long a time as S-OIL. It signed an agreement with the Cultural Heritage Administration in 2008 and has been financing the preservation attempts, as well as organizing other events related to the cause since then.

“Patronage in the natural monuments takes time to bear tangible results,” said Jang. “It’s a long-term investment and a company must be patient. I say you have to give it at least 10 years to see some results.”


Saving one at a time

The otter is not the only creature benefitting from S-OIL’s patronage of Natural Monuments.

Since beginning its sponsorship of the species in 2008, the company has been expanding its support to other living creatures.

S-OIL has created characters inspired by the animals it supports and uses them on its stationery and business cards.

As one can see, S-OIL’s support for natural monuments is about increasing the number of different species it helps to preserve while also ensuring its efforts encompass a wide range of creatures such as mammals, fowls, fish and insects.

“As we were planning a patronage program related to the environment, we found that most companies’ programs included either a writing contest, a drawing contest or picking up garbage, and were a rather indirect form of support,” said Shin Young-chul, a social worker at the company’s operation support team.

Shin said S-OIL wanted to get involved more directly, which is how its staff came across the “One Protector for One Cultural Property” program, a volunteer system the Cultural Heritage Administration introduced in 2005.

Under the project, a corporation, a school, a family or an individual can choose a cultural property and help with its preservation and maintenance. Since 2005, about 50 companies have signed up to the program, according to the Cultural Heritage Administration, and have so far poured 16 billion won ($14.5 million) into the causes.

“Since the planning stage, we were looking for a program we would run for a long time,” Shin said.

“We understand very well that improving the environment is extremely difficult and that results don’t come around fast. That’s why we intend to support research organizations and civic groups steadily for a long time.”

When asked what it is they have learned from running the program for the past eight years, S-OIL officials say they found it very regrettable just how many research organizations and civic groups that work to preserve the environment are suffering from financial difficulties.

Besides funding researchers and civic activities, S-OIL is working to raise awareness for the plight of endangered species. Its designers have created caricatures of the four creatures the company focuses on, which are used in various stationary products within the company. Its employees and their families also take part in annual volunteer programs such as the releasing of the otters and barbels and the feeding of cranes.

The company believes it is important for Korea’s youth to take part in preservation. For that reason, S-OIL has been running the Natural Monument Camp for children of low-income families as well as volunteer programs for university students to ensure these groups of young people can also participate in efforts to save endangered creatures.

“The programs will take place this year, too, and they will likely take place during the summer break,” said Kwak Soo-ji, an S-OIL publicist.

The company also believes the community is important in its patronage.

For that reason, S-OIL also holds free cultural events - unrelated to its natural monument sponsorship - on the final Thursday of every month in the Gongdeok-dong area, where its headquarters moved in 2011.

So far, the company has held 54 cultural events, which were attended by about 17,500 local residents, employees and their families.

“Although it’s a free performance, we always try to bring quality shows,” said an S-OIL official. “We hope the performance will provide a stage for young artists to show off their talent and for local residents to get a cultural experience.”

In Ulsan, where S-OIL’s production facilities are located, it supports local festivals and cultural programs such as the annual Ulsan Whale Festival. Ulsan is home to various whale-related relics and activities such as the Ulsan Petroglyph Museum and whale-watching tours.

S-OIL traces its roots to Korea-Iran Petroleum, a joint venture started in 1976 between Korea’s Ssangyong Cement Industrial and National Iranian Oil Company (NIOC). It was considered the first collaboration between a crude-oil-consuming country and an oil-producing country. The company went public in 1987 and became S-OIL in 2000.

Over the years, it has grown into one of the most recognized oil refiners in the Asia-Pacific region. In 2012 and 2013 it ranked on the Fortune Global 500 list and its Onsan Refinery in Ulsan boasts a crude distillation capacity of 669,000 barrels a day, according to the company’s website.