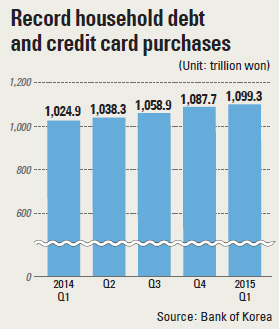 Amid growing concerns regarding a recent hint by the U.S. Federal Reserve that it would raise its benchmark interest rate in the near future, Korea’s household debt - including credit card purchases - has once again reached new heights in the first quarter of the year.

Although the overall rate of debt increase slowed compared to the previous quarter, it is now within a trillion won ($905 billion) of reaching 1,100 trillion won.

Debt and credit card purchases have been seeing exceptional growth since the third quarter when the central bank cut its key interest rate in hopes of boosting the stagnant domestic market. Since August, when it shaved 0.25 percentage point off the policy rate, the central bank has made two additional rate cuts, with the most recent one in March. Today, the policy rate stands at an all-time low of 1.75 percent.

Compared to the fourth quarter of 2014, the first three months of this year saw 12.8 trillion won of fresh loans taken out, bringing the total to 1,040.4 trillion won.

“Normally, due to seasonal factors, the rate of increase for household debts slows down in the first quarter,” said Shin Sung-wook from the statistics department of the BOK.

Rising household debt is a major concern for the BOK, which faces steady pressure from the government for additional interest rate cuts to further boost the nation’s economy. In fact, the state-run think tank Korea Development Institute (KDI), in revising its economic outlook for this year, noted there is a need for one or two additional policy rate cuts. The KDI last week lowered its outlook from the 3.5 percent it forecasted in December to 3 percent. The Bank of Korea earlier also lowered its outlook from 3.4 percent in January to 3.1 percent in April.

Exports in particular, which have been one of the fundamental engines driving the Korean economy in recent years, have been struggling because of the devaluation of the Japanese yen and the European Union’s euro, which is giving competitors an advantage in price competitiveness.

The situation has become more complicated as Federal Reserve Chair Janet Yellen over the weekend hinted at a possible interest rate hike.

BOK Gov. Lee Ju-yeol earlier this week noted that the situation has increased uncertainties in the market. The Korean central bank has frozen the key policy rate for the past two months.