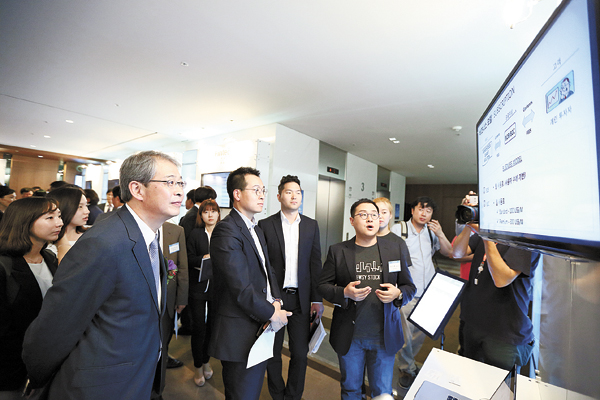 Cutting-edge financial technologies were on display Wednesday at the second round of “Demo Day,” a monthly event organized by the Financial Services Commission (FSC) to help local companies promote their wares to bankers, governmental officials and business executives.

The event was part of the Park Geun-hye government’s efforts to turn the Korean financial technology, or fintech, industry into a new growth engine for the sluggish domestic economy.

Ten Korean fintech companies attended the event held at Nine Tree Convention, central Seoul, and six were offered chances to demonstrate their services in front of the audience.

Four companies later signed memorandums of understanding (MOUs) with financial institutions, in which they agreed to partner together to facilitate the development of new technology.

Irience signed an MOU with the Industrial Bank of Korea to work on a system that authorizes financial transactions via iris recognition.

According to Irience, customers will be able to authorize money transfers or log in to websites by scanning their eyes with their smartphone camera. The system will check that scanned image against biometric information users store in an online database run by the company.

“We are already in the process of building a center for storing customers’ physical information in partnership with Korea Information and Communications Co.,” said Hwang Jeong-hun, a manager at Irience.

Another firm that benefitted from the event was The Cheat, which inked an MOU with Woori Bank.

According to the FSC, many fintech firms have proposed solutions for phishing, but most of them were focused on tracking down the culprit once a transaction had already been completed.

“We are sure our services will reduce financial fraud by more than 50 percent,” said Kim Hwa-rang, head of The Cheat.

A system that collects customers’ shopping histories to evaluate their credit worthiness also drew attention from the audience. The new system, designed by the company Fintech, offers bankers information on customers’ current credit rating as well as their shopping habits. If the customers are entrepreneurs, the system also shows real-time information on business sales and synthesizes information from social networking services to show reviews of the entrepreneur’s products.

The FSC also invited several British businessmen and investors to the event, including those from Level39, Europe’s largest technology accelerator for financial, cybersecurity and fintech services.

In a speech at the event, Eric Van der Kleij, head of Level39, said the British company was considering investing in Korean fintech and that he believed Korea could lead the worldwide fintech industry within the next two to three years.

Level39 also signed an MOU with the FSC at the meeting to collaborate on nurturing Korean fintech start-ups and entrepreneurs.

“The government sees it as critical to make the fintech industry a new growth engine, not just a temporary boom,” said FSC Chairman Yim Jong-yong at the event. “We have carried out a full-scale reform of the unreasonable regulations in the financial sector that hindered the emergence of fintech services.

“We’re working on allowing banking transactions without a face-to-face contact - which hasn’t been allowed over the past 20 years - and we are currently creating more favorable conditions for online and mobile transactions.”

In response to the demand for quick and easy financial transactions, Yim promised to abolish the regulations that require credit card users to input security codes for online credit card payments.

“People will be allowed to use identification systems like biometric information instead of signatures or security codes,” he said.

According to Yim, the new identification platform will also be used to transfer money at local banks.

“I understand the people saying the current law only approves the use of security codes for electronic transfers of money, which hinders the emergence of new cybersecurity methods,” Yim said.

“I will revise relevant regulations to allow the use of various security platforms in electronic fund transfers.”