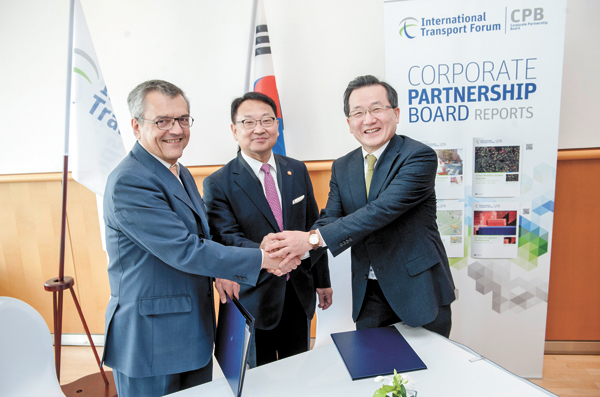 LEIPZIG, Germany - The International Transport Forum (ITF) 2015, which discusses strategies for better transport in the 21st century, kicked off Wednesday with the theme of Transport, Trade and Tourism.

The three-day annual event was established by the ITF in 2008 and more than 1,000 participants from 80 countries including ministers and political decision makers, as well as CEOs of transport, tour and car businesses, gathered to talk about the role of transport in a world of growing global trade and rapidly expanding tourism.

“As an airport that has been recognized as the world’s No.1 airport for a decade, the Incheon airport expects to contribute the know how of providing a good quality of transport service, which the ITF considers significantly in a world of expanding tourism and global trade,” said Yoo, the Transport Ministry chief.

Incheon Airport is one of the world’s 15 busiest airports, with more than 45 million passengers last year. It has been ranked the No. 1 airport in the world by Airport Council International for 10 consecutive years.

The main subject at the forum was what the transport sector can do for trade and tourism, which are considered important engines of world economic growth. According to the ITF, international trade represents 50.6 percent of global GDP and is expected to increase 350 percent in next 35 years. The ITF added that trade flows are shifting as a third of trade will occur in Organization of Economic Cooperation and Development nonmember countries by 2015, which only accounted for 15 percent five years ago.

Of the world’s 10 largest container ports, nine are now in the Asia-Pacific, and Shanghai handles more containers than Europe’s three biggest ports put together. Road freight will see its share of international freight tonnage rise by 40 percent by 2050.

Participants in the forum said these trends will require strategic investment, and speakers included Oh Jae-hak, vice president of the Korea Transport Institute, and Mohamed Najib Boulif, Morocco’s deputy minister of equipment, transport and logistics. They said the development of a multi-modal freight hub in the Arabian peninsula, for instance, could have repercussions on major sea and air links between Asia, Europe and Africa.

The forum also discussed the role of transport in sustainable tourism growth. According to the ITF, three billion people are expected to join the middle-income bracket in emerging economies by 2030, mostly in Asia. Since tourism can create wealth and boost regional development, providing cheaper and more direct transport options is necessary. But the ITF said this will need to be balanced with reducing the environmental impact, particularly on air travel emissions.

Regarding environmental issues, UN Secretary General Ban Ki-moon has urged the world’s transport ministers to put more effort into battling climate change and finding new green solutions. “It is time to reshape the world’s transport systems for a cleaner, safer and more sustainable future,” Ban said in a videotaped message.

On Thursday, transport ministers will discuss mitigating transport-related climate change during a ministerial session scheduled for the Leipzig summit.