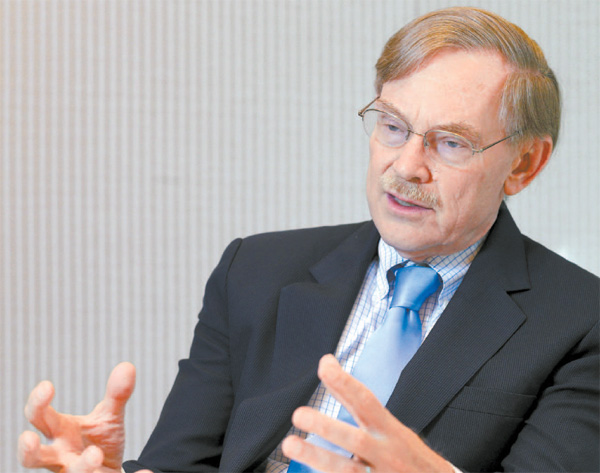 Robert Zoellick, formerly a president of the World Bank and U.S. deputy secretary of state, is currently a foreign policy adviser to Jeb Bush, the former Florida governor who is preparing his candidacy for the next U.S. presidential election.

The Harvard Law School graduate sat down with the JoongAng Ilbo for a brief chat about a broad range of topics spanning from China’s rise to the U.S.-Korea alliance.

Q. How do you evaluate Washington’s stance on the Asian Infrastructure Investment Bank (AIIB)?

A. I think the U.S. government had a mistake in strategy and poorly executed tactics as well. There is a big need in Asia and around the world for infrastructure investments. So I think the Chinese proposal to finance more infrastructure could be constructive if the institutions were developed in a fashion that supported good governance principles such as anticorruption, open procurement and environmental issues.

My approach would have been to say it is a good idea for China to help foster more financing for infrastructure, but let’s do it in concert with the World Bank, the Asian Development Bank, and make sure that issues of procurement, anticorruption and environment are taken care of.

So why did the Obama administration try to block the AIIB?

You have to ask them. I think it was more of a reflexive concern about protecting standards of the multilateral banks. And that is a respectable concern, but diplomatically I would have approached the issue by saying yes, as opposed to saying no.

Some media in Korea, including a columnist at our paper, have commented that the United States is risking its reputation by blocking the AIIB.

I don’t think one has to make a big deal about these things. I think the U.S. position was a mistake, it is unfortunate, and people should move on. But I think in the larger scheme of things, I hope it is a lesson that parties can learn from about how the current multilateral institutions and the U.S. and others can work with China as China engages more in international economy.

Many opinion leaders in Korea would like to know who will win in the next presidential election.

Many Americans would like know. Well I have a bias because I am helping the Gov. Jeb Bush. So I am from the different party. But let me suggest it this way: I think that Secretary Clinton will almost certainly win the unanimity from the Democratic Party. I think it will be a very competitive general election. The Republican side is wide open. My preferred candidate, Jeb Bush, will be one of the contenders, but there are I think almost 20 people there being considered. Now that is unusual in the U.S. system because normally the Republicans, as a more conservative party, tend to select the nominee from the person whose time has come. And normally the democratic primary is much more fractious. This time it is reversed.

But I think that one possible benefit for any of the Republicans is that whoever is nominated will have to compete.

They will have to work very hard. And so some people look, for example, at Governor Bush and compare him with Hillary Clinton by saying they are both from presidential families. While that is true, if Bush wins the nomination, he will have to earn it himself. It won’t be something he gets because of his name. And so I think no one can really tell who is going to win. In recent elections, the democrats have had an advantage in Electoral College, because under our system if you win a state, in most cases you get all the electoral votes of the state.

Given the demographics of the United States, it is very hard to win if you don’t do better with some of the minority votes. So that is one reason I think Governor Bush, who speaks very good Spanish and whose wife is Mexican-American, or Marco Rubio, who is Cuban-American, will be better positioned if they are nominated, to reach across a broader public.

But the other point I will say on the election relates to foreign policy is that normally, since the end of the Cold War, foreign policy has been less important to American voters. However, what is striking this year is that the terrible and brutal beheadings by ISIS seem to affect the American public and foreign policy has risen in the polls from being about the fifth-ranked issue to the second-ranked issue.

Now most people view candidates on foreign policy through the prism of leadership and character. So it is less a question of a particular person’s positions and more whether they convey a sense of being competent and being able to lead the U.S. in the global system. And for some of the republicans who are governors, this will be a challenge because they have the advantage of having been executives, so they run a state, and that is often good preparation for being a president. But they don’t have the same international experience.

Now, on the democratic side, Hillary Clinton has been secretary of state, so she has the foreign policy experience. But her drawback will be that the public’s assessment, at least today, of President Obama’s foreign policy has been weaker, and she is associated with that. There is always a challenge for a politician to win a third term for the party. It helps if the predecessor was popular, because you are inheriting the predecessor’s policies, but you also have to show how you will be different. Those are some of the issues that will affect the campaign. I think for Korea, the good news is, as a poll conducted by the Chicago council on global affairs in 2014 affirmed, over 60 percent of the American public support a U.S. troop presence in Korea. And that is a good thing. It shows there is strong commitment to the alliance relationship. And part of it is based on the concern about North Korea and its behavior, and, obviously, the nuclear weapons, missile tests, and set of belligerent actions that helped underscore the importance of the U.S.-Korean alliance.

What are your thoughts on the U.S. economy?

I think the U.S. economy will grow faster in the course of 2015.

I think that the good news for the international economy is that the U.S. recovery is relatively broadly based. But it is the weakest recovery since World War II. It has been a rather slow growth recovery. What I would look to is that consumption in the U.S. economy is about 70 percent of GDP. And consumption is largely driven by employment and income. As employment numbers have generally continued to improve, incomes have increased.