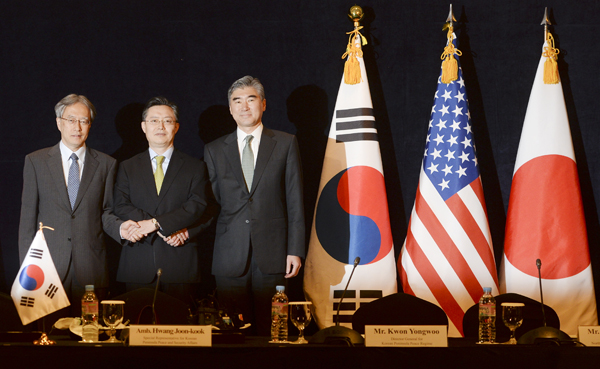 Representatives of South Korea, Japan and the United States said they would increase pressure on North Korea to bring it back to six-party talks on denuclearization, which have been suspended for more than six years.

“We had in-depth talks over producing [additional] measures that will curb the North’s provocations,” said South Korea’s top envoy to the talks, Hwang Joon-kook, following a three-way meeting at the Lotte Hotel in Seoul on Wednesday.

Hwang stressed that while the international community has urged the North to return to the six-party talks with no preconditions, North Korea “has not been answering the calls.”

The Korean envoy said that aside from pressure, the countries will also open diplomatic channels to bring the North back to the Beijing-based negotiations.

South Korea, Japan and the U.S. “concurred on the depth of unpredictability” of North Korea, Hwang said, a remark that seemed to refer to recent reports of the alleged execution of North Korean defense minister Hyon Yong-chol for showing disrespect to leader Kim Jong-un.

He said the allies would work together to deal with unexpected situations triggered by Pyongyang.

Echoing Hwang’s remark on the current stalemate in the negotiation process, U.S. envoy Sung Kim said the three countries “agreed on the importance of enhancing pressure and sanctions on North Korea even as we keep all diplomatic options on the table.”

When asked if enhancing pressure would mean adding more United Nations sanctions on an already sanction-burdened country, the former U.S. ambassador to Korea said he didn’t have any specific measures to announce.

He reiterated the importance of toughening up pressure on the North, which he said had “rejected all of our sincere diplomatic outreach efforts to them.”

Such outright rejection, the American negotiator said, had given them “no choice but to cooperate on enhancing pressure on North Korea.”

Japanese delegate Junichi Ihara said the three negotiators shared “a sense of urgency” regarding the North’s drive for nuclear weapons.

The three did not rule out the possibility that they could bring up the issue of dire human rights conditions in the North in their efforts to put more pressure on the Kim Jong-un regime.

The six-party talks were originally started with the two Koreas, Japan, Russia, China and the United States to convince Pyongyang to abandon its nuclear ambitions.

North Korea pulled out of the talks in late 2008. Three years after the last talks in the six-nation framework, North Korea declared itself a nuclear state in a constitutional amendment in April 2012, 10 months prior to its third nuclear test.

Technically the talks are still about denuclearization but they are more likely to deal with other issues going forward.