North has new and fast submersible

North has new and fast submersible 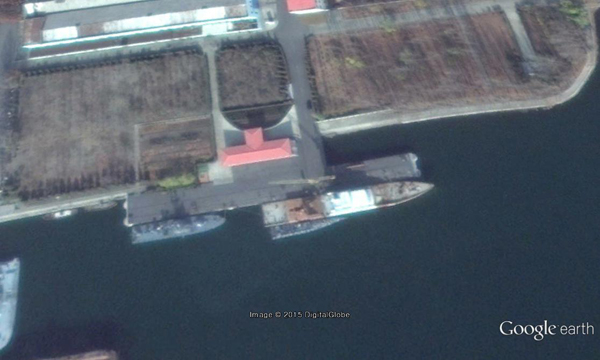 A new type of Very Slender Vessel is seen at right docked at Nampo Port in North Korea. [Screen capture from Google Earth]

Over the past year, the South has been following intelligence that the North was developing a new model of Very Slender Vessel (VSV) capable of traveling at speeds faster than 50 knots (58 miles per hour). The new ships are armed with 30-millimeter guns and torpedoes and the Navy considers them a serious new threat.

According to the source, the South recently observed a VSV in the waters off Yongmae Island near the western maritime border, the Northern Limit Line. The North Korean island is only about 20 kilometers (12 miles) northeast of the South’s Yeonpyeong Island.

In 2013, North Korean leader Kim Jong-un emphasized the importance of developing improved VSVs. The South obtained intelligence that the North was in the final stage of development after the new ships were spotted in Nampo Harbor at the end of last year and early this year.

Now the South Korean military admits the crafts have been operationally deployed in waters near the border.

“The North built about 10 VSVs at the Dec. 7 Factory located near the Taedong River south of Pyongyang,” a senior official told the JoongAng Ilbo. The factory is directly operated by North Korea’s Reconnaissance General Bureau.

“The North appears to have decided to deploy the VSVs at the Yellow Sea Fleet Command in order to strengthen its capabilities in the western waters and to infiltrate the South’s Baeknyeong Island in times of emergency,” the source said. Military authorities believe that about seven VSVs were operationally deployed so far.

A VSV is capable of penetrating waves at a high speed better than other craft. The North has painted the cylindrical vessels with stealth paint to evade radar.

While little is known about the new vessel’s specifications, the South Korean military believes it is about 30 meters (98 feet) long and 5 meters wide.

“The North’s vessels were old and armed with manual guns,” the source said. “They were, therefore, far behind our Navy’s capabilities. This VSV is a new threat.”

The South is concerned that the VSVs will be used to send special operations forces to infiltrate the South. The United States is using its own VSVs for infiltration missions by special forces.

The South is concerned that its own ships - even the fastest ones - are too slow to catch up to the radar-evading VSVs. The South Korean Navy’s guided-missile patrol killers travel at a speed of 40 knots.

The Agency for Defense Development said it will improve guided-missile capabilities and deploy them next year to better counter the growing North Korean threats.

The Navy also launched Wednesday the nation’s second minelayer. The 3,000-ton ship, named the Nampo, was launched at the shipyard of its manufacturer, Hyundai Heavy Industries.

The ship is scheduled to be delivered in October 2016 and the Navy plans to commission it in April 2017. As of now, the Navy has one minelayer, the Wonsan, which was deployed in 1998.

The 114-meter-long ship, run by a 120-man crew, is equipped with mines, torpedoes and 76-milimeter guns. It travels at a speed of 23 knots and is painted with stealth paint. Many of the technologies used for the vessel were indigenous, and the Navy said the new minelayer will strengthen its underwater warfare capabilities.