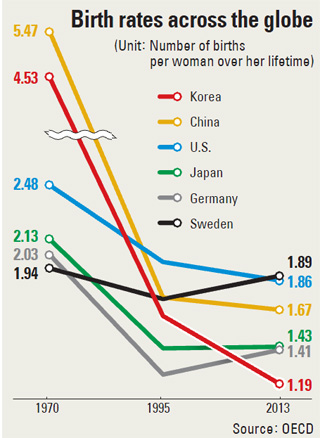 South Korea’s birth rate ranks the lowest among the 34 countries in the Organization for Economic Cooperation and Development (OECD) as well as major nations, including China, Brazil and Russia.

According to a recent report by the OECD, South Korea recorded 1.19 births per woman as of 2013, the lowest among the 40 countries documented.

Rather than calculating the birth rate as the number of live births per every 1,000 people, the report came to its conclusion by counting a woman’s total births over her entire life.

South Korea barely missed being last in 2012. At the time, the country’s birth rate stood at 1.30 - tied with Poland and slightly higher than Portugal with 1.28 births.

Both nations performed just barely better than Korea in the latest report, though they also saw declining birth rates, with 1.21 for Portugal and 1.26 for Poland.

The JoongAng Ilbo recently conducted a telephone interview with Willem Adema, who works at the OECD Headquarters in Paris, to discuss the latest findings.

A senior economist in the organization’s Social Policy Division, he said that if South Korea wanted to raise its birth rate, it needed to first “change this culture of recognition at the office that practically forces workers to abandon their family lives.”

The following are edited excerpts from the interview:

Q. Why do you think South Korea has such a low birth rate?

A. I’d like to point out that it is difficult to maintain a balance between work and family life. Young people put a significant amount of time and effort into getting a job and settling down. They need to look like they’re devoted to the company, and that makes it hard for them to think about having children. Statistics show that they are marrying later and having only one child.

Which policies should the government adopt?

The government has implemented a variety of policies over the past five to 10 years, including expanding child care facilities and providing maternity leave. But it needs to rearrange those policies in a logical, consistent system. The process from childbirth to maternity leave, day care and elementary school should be natural, which means parents actually need to make use of the current system. The government also needs to trust that this system won’t suddenly disappear and that parents don’t have to give up either work or family.

How can we implement that system in Korea?

South Korea has the world’s longest working hours, which means that children must stay at day care centers for more than 10 hours. Simply expanding child care facilities won’t resolve the problem in this situation. Korea’s policies must be more sophisticated so that the child care system and parents’ working conditions can complement each other.


France’s birth rate increased because the government provided more family allowances. Can we use the French system as a benchmark?

France focused on a baby bonus, but it’s different in Korea. In Korea, private education expenses - which simply don’t exist in other member countries in the OECD - largely affect the birth rate.

What do you suggest for South Korea?

The labor market must change. And it’s important for business managers to recognize that and attempt to change the situation. They also need to provide paternity leave. Allowing only women parental leave stigmatizes investment in female workers. If men use paternity leave, it will reduce discrimination against female employment and balance out work and family life.

What do you think of the complaints from the business side?

Whether it’s a man or woman, they can only recruit talented people, providing good working conditions. European companies are already changing.