Golfer and the military battling in Daegu court

Golfer and the military battling in Daegu court 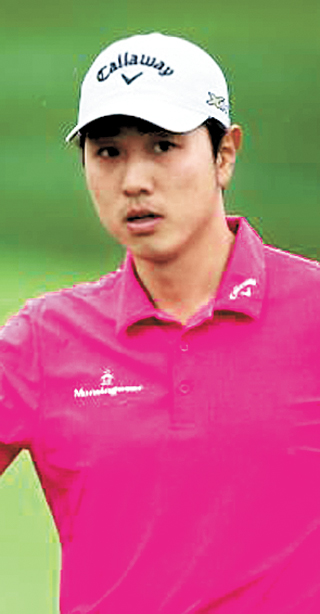 PGA Tour golfer Bae Sang-moon may not get an exemption from military duty even if he collects a medal in the 2016 Summer Olympics in Rio de Janeiro, unless he wins a lawsuit to overturn his violation of the Military Service Act.

Bae, who turns 29 in June, has been charged with violating Korea’s law on military conscription for failing to return when his overseas travel permit expired.

Under the Military Service Act, men aged 25 to 35 who have not completed their mandatory military service must have a special permit to stay overseas, but the Military Manpower Administration (MMA) in December rejected Bae’s request to extend his travel permit. The MMA said he spent too much time in Korea during 2014 to be considered an overseas resident. The Daegu-born golfer received permanent U.S. residency in January 2013.

According to the MMA, Bae was in Korea for 133 days - not consecutively - to compete at tournaments and handle administrative tasks for admission to graduate school at Sungkyungkwan University. The law states the MMA can cancel overseas travel permits and impose military duty on those who spend a total of six months or three consecutive months in Korea in a calendar year.

Because his travel permit expired Dec. 31, Bae was required to return to Korea by Jan. 31 to perform his military duty. Instead, the two-time PGA Tour winner filed an administrative lawsuit to nullify the MMA’s decision and is staying in the United States while the lawsuit is under way.

Because Bae failed to return to Korea by the end of January, the Daegu regional office of the MMA on Feb. 2 charged him with violating the Military Service Act in papers filed at Daegu Nambu Police Station. Police this month issued a “targeted notification” requiring Bae to appear before police within a month of returning to Korea.

At the second hearing in the administrative lawsuit to overturn the MMA’s rejection of an oversea travel permit extension in Daegu District Court on Wednesday, Bae’s lawyer said the golfer should be given a chance to compete in the Olympics, citing the footballer Park Chu-young. Park got a military duty exemption when Korea won a bronze medal in the 2012 London Olympics after delaying military duty with 10-year Monaco residency card.

In Korea, male athletes who win any medal in the Olympics or a gold medal in Asian Games don’t have to do their mandatory military duty, which is about two years, though they still must do the four-week basic training.

“Violators of military law can’t be classified as art and sport duty soldiers even if they win a medal,” an MMA official told JTBC Golf, an affiliate of Korea JoongAng Daily. “Technically, the law states the overseas travel period extension can be applied until age 28, and Park Chu-young went to the Olympics when he was 27 and got the military benefit.”

The court on Wednesday ordered the MMA to submit data of any cases where an athlete aged 28 or older has delayed military duty to compete in the Olympics or Asian Games.

The next hearing is scheduled June 24.