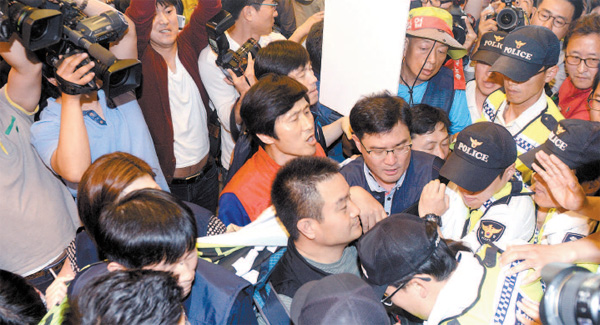 Members of the two biggest umbrella unions try to storm a conference room hosting a forum by the Korea Labor Institute to discuss the government-led peak wage system reform held at CCMM Building in Yeouido on Thursday, but are blocked by police. [NEWSIS]

A public hearing to promote the government’s new peak wage proposal degenerated into a melee as members of the nation’s two largest umbrella unions violently scuffled with authorities to protest the plan.

Employment and Labor Minister Lee Ki-kweon, invited to deliver the keynote speech, couldn’t even enter the hearing in the CCMM Building in Yeouido, western Seoul, on Thursday.

Roughly 500 members of the Federation of Korean Trade Unions and the Korean Confederation of Trade Unions (KCTU) surrounded the minister as soon as he appeared and blocked his way with chairs and desks. After about 10 minutes of being barricaded, Lee finally left the scene, scrapping his speech.

“We must block the Park Geun-hye government’s change in the worst possible way,” a member of the KCTU said at the venue. “It is not a ‘hearing’ but a ‘show’ to deliberately ram through a unilateral change in the wage system by management.”

The Labor Ministry is trying to persuade the public to accept a so-called “peak wage system” for the country’s private sectors, which gradually cuts salaries of senior staffers after they peak at a certain age, generally between 55 and 60. By cutting wages a few years ahead of workers’ retirement, companies can afford to extend the retirement age a few years.

The move came after the National Assembly passed a new law in 2013 to extend Korea’s retirement age to 60 from an average 57 starting next year in all private and government-run companies.

As workers near retirement, their salaries are more than twice those of entry-level workers in Korea. The peak wage system would not only make it more affordable for companies to extend the retirement age, but it’s also supposed to lead to the hiring of more young people. Youth joblessness is a serious problem in Korea.

Unions say they don’t believe the retirement age will be extended at all companies in the country, particularly at small enterprises. They say the new system is a ruse to save corporations money at the expense of workers.

The system is part of the Park Geun-hye government’s ambition to reform Korea’s labor market to increase flexibility and the competitiveness of Korea’s workforce. The government sees the current level of salaries and job protection for salaried workers in the country as being excessive, preventing the creation of more jobs for young people.

Since September 2014, the administration has pushed a package of labor reforms, including the peak wage system, and held trilateral arbitration meetings with unions and representatives of the corporate sector.

In early April, the trilateral negotiations failed and were ended.

Before they failed, all sides agreed to a peak wage system, but labor and companies disagreed on when workers’ salaries should start to shrink.

On May 7, the Ministry of Strategy and Finance announced a plan to adopt the peak wage system in state-run organizations starting next year. On May 13, it announced measures to give financial assistance to private companies that adopt the system and hire more young people.

On May 26, President Park publicly expressed her intention to push the system, saying at a cabinet meeting that “in general, both labor and management agreed on the necessity of the adoption of the peak wage system.

“So we should take the lead by implementing the system in the public sector first,” she said, according to the Blue House. “Considering the desperate situation of our young people, we can’t delay or abandon reforms in our labor market.”

The biggest hurdle for implementation of the system by private firms is the Labor Standard Act’s Article 94.

The act requires a consensus from labor unions or a majority of votes by employees for any changes in employment rules that are “disadvantageous” to employees.

Labor Ministry authorities claim the peak wage system would not be “disadvantageous” for workers.

The ministry cited as precedent a Supreme Court ruling, which said if a change in employment rules is found to be “reasonable” based on “common sense,” it would not be “disadvantageous” to employees.

According to the Korea Law Information Center, a ruling was made in 1978 in a similar case. At the time, the Supreme Court upheld a lower court’s ruling in favor of the management of Construction Guarantee, a state-run body, in a lawsuit filed by a laid-off worker against the management.

The worker claimed it was disadvantageous for workers that the company unilaterally set its retirement age at 55 and laid off workers older than that.

But the Supreme Court said it couldn’t be seen as an unreasonable policy based on “common sense.”