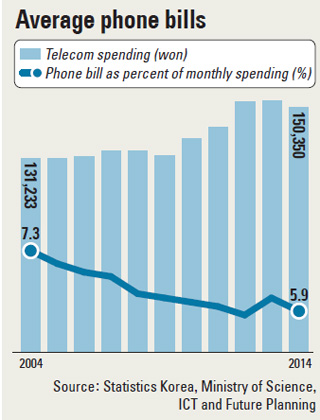 The government Thursday introduced a plan to allow a fourth telecom into the Korean mobile telecommunications market, which has been dominated by SK Telecom, KT and LG U+.

The Ministry of Science, ICT and Future Planning on Thursday announced it will accept applications by the end of September and pick a finalist in October. The new carrier will start operations in 2017.

Cutting back household spending on telecom bills was one of President Park Geun-hye’s election pledges in December 2012.

“Looking at overseas examples like France, Spain and Japan, those countries succeeded in reducing household telecom bills by up to 43.9 percent last year, when compared to the past when there was no new carrier,” said Cho Gyu-jo, director of the ICT Ministry’s telecommunications policy division.

The government will allocate new data frequency bandwidths of a total of 80 megahertz for the new carrier and provide additional bandwidths for overseas roaming.

The ministry also announced it will finally lift the telecom bill approval system in an effort to trigger competition among the three existing carriers. Telecoms will no longer need government permission when they adjust their rates.

This is not the first time the government has tried to bring in a new carrier. Korea Mobile Internet, a consortium of small IT and telecom companies, bid six times since 2011 to be the fourth carrier. But the ministry rejected its application each time due to the consortium’s unstable financial position.

Conglomerates like Hyundai Department Store, CJ Group and Taekwang Group, which already have some kind of telecom or cable broadcasting affiliates, are being discussed as possible candidates.

CJ Group is likely because the company has been successful in its thrift phone business and is one of the few candidates that can afford to invest billions of won in a network.

But since the group’s Chairman Lee Jay-hyun was convicted of embezzlement and misappropriation of corporate bonds and suffers from poor health, the company has been mum about its plans.

“We are aware of such rumors about us,” a CJ Hellovision spokesperson told the Korea JoongAng Daily in a phone interview. “Nothing has been confirmed and we don’t have a plan yet.”

SK Telecom, KT and LG U+ say the government’s decision to introduce another carrier is undesirable.

“The competition among the three carriers is already overheated for such a small pie,” said a spokesperson from LG U+. “We don’t think a fourth carrier can be a solution to cool down the competition. We think it will heat up the market even more.”