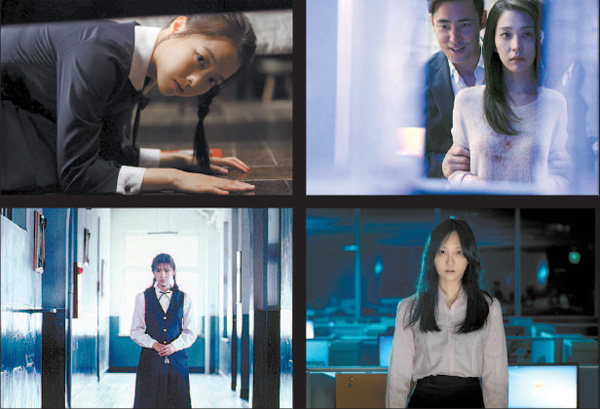 Horror movies were at their peak when “Whispering Corridors” (1998), bottom left, achieved box office success. But because of repetitive themes and implausible plotlines, films from the genre such as “The Wicked” (2013), bottom right, and “Black Hand”(2015), top right, have failed to draw in audiences. However, “The Silenced,” top left, with a competent cast and an appealing plot, is hoping for a horror revival. It opens nationwide on June 18. Provided by each distributor

There was a time when watching a horror movie during summer was considered by Koreans an effective way to escape from the sizzling weather. Posters for scary films hung up at cinemas signaled the arrival of the summer season.

But that is no longer the case. The genre, which enjoyed much popularity in the early 2000s, is now waning at Korean box offices.

Some distributors have moved the release dates of their spine-chilling films forward to spring or pushed them to autumn in order to avoid direct competition with Hollywood blockbusters.

But the dire situation for these movies has not improved. “Black Hand,” which opened this April, and “The Wicked,” which debuted last fall, saw less than 10,000 admissions each.

No expertise in the field

The release date does not seem to have much of an effect on the success of a horror movie, but critics say that a plausible plot and competent directors are two key factors.

However, as the genre does not rely much on big budgets or star-studded lineups, many amateur filmmakers jump in to scary movies to test their directorial skills.

“Horror films call for diverse types of skills in filming and editing,” said film critic Kim Bong-suk. “Many newbie directors are joining the genre to level up their techniques.”

As a result, the outcome can lack coherence, a tight plot and the power to keep the tension until the end.

“It has become a vicious cycle,” Kim added. “When you take a look at hit horror films from the past, their scripts were tight. It’s not just about startling the audience here and there, but it has to have a probable, interesting plot,”

Scraping together seemingly interesting elements such as school bullying, tragic deaths and cursed objects without a unique factor is generating cookie-cutter horror movies.

That is why films like “Mourning Grave” (2014) and “Death Bell” (2008), both of which contain a theme that was popular at the time - cursed schools - were neglected by audiences.

“In America, there are filmmakers who proudly call themselves the masters of horror movies and they keep experimenting with new themes and shooting skills,” Kim said. “But in Korea, the genre is considered a gateway to making a bigger-budget film, which is why a collection of appealing elements is destined to go down the drain.”

This propensity is likely why horror movies still sell well at box offices in the West. Last year, “Ouija” opened No. 1 spot at the U.S. box offices.

A year before that “The Conjuring” also swept the North American box office, debuting at first place.

No one would deny that getting a thrill is one of the biggest attractions of horror movies.

But ever since thrillers started to draw attention in Korea, with the crime thriller being the most prominent subgenre, horror movies have begun to loose their firm foothold in theaters.

“The horror movie is all about the thrill,” said culture critic Ha Jae-keun.

“But as horror films keep neglecting quality, people are now veering towards alternative choices to fulfill their thrill craving.”

Crime thrillers, which were previously not considered mainstream movies, are now doing very well in Korea, prompted by box office hits like “Memories of Murder” (2003) and “The Chaser” (2008).

With the summer season officially approaching, there are still a number of homegrown horror films vying for a revival.

“The Silenced,” starring Park Bo-young and Uhm Ji-won, is set to open nationwide on June 18. It trails a mysterious occurrence in a dormitory where the school girls who live there start disappearing one by one.

While technically a mystery thriller, not a horror, if it comes with a well-built plot, the movie will be able to attract enough of an audience, said Ha.