Court sides with government in fight against KTU

Court sides with government in fight against KTU 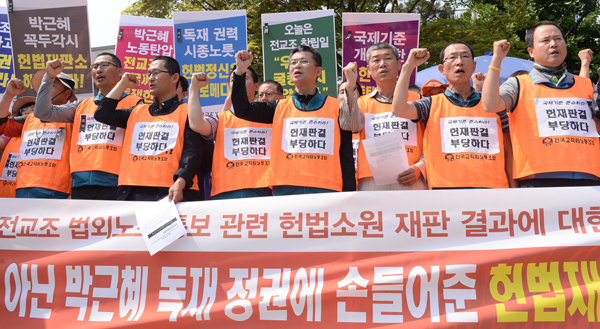 Leaders of the Korea Teachers and Education Workers’ Union stage a protest in front of the Constitutional Court in Seoul on Thursday after it ruled that the government’s decision to retract the union’s legal status was constitutional. [NEWSIS]

The Constitutional Court on Thursday ruled that a controversial clause in the law governing teachers’ unions is constitutional, empowering a government decision to retract the legal status of the Korea Teachers and Education Workers’ Union (KTU) for insisting on keeping as members teachers who had formerly been fired.

The constitutionality petition was a crucial part of the legal battle between the country’s second-largest teachers union and the government.

The verdict puts the union - with 60,000 members - at a disadvantage in its ongoing lawsuit to challenge the government’s decision.

In October 2013, the Ministry of Employment and Labor informed the KTU of its decision to take away its legal status based on the fact that the union had refused an order to amend its bylaws.

The bylaws provided memberships to teachers who had been dismissed - nine former teachers were still in the union at the time - and the ministry argued that those codes were in violation of the law governing the establishment and operation of teachers’ unions.

The KTU filed a lawsuit to challenge the ministry’s decision, though the Seoul Administrative Court ruled in favor of the government. The court granted an injunction to the union, however, barring the government from treating it as an unlawful group throughout the court battle.

In 2014, the union took the case to the Seoul High Court, asking the appeals court to order the ministry to reverse its decision. The union also requested that the high court ask the Constitutional Court to examine the law that the ministry had used as legal grounds to strip the organization of its status.

In order to protect the union’s role representing teachers, it is inevitable to provide memberships only to current teachers, the court said, adding that the dismissed teachers, under the law on trade unions, can create a separate union of their own; therefore, their right to organize was not infringed upon by the relevant article.

Barring dismissed teachers from joining the KTU is a small restriction, the court said, but when they join the union and exercise rights, the union can face serious infringement on its independence. It is up to the Seoul High Court to validate the government’s decision to take away the KTU’s legality.

The union said it will stage a demonstration outside Seoul Train Station on Saturday.

The KTU was founded in 1989 as an illegal union because public servants, including teachers, were banned at the time from participating in political activities or expressing political views. It was fully legalized in 1999, before being stripped of its legal status in 2013.

Once the union loses its legal status, it will lose about 5.2 billion won ($4.9 million) in government funding and its right to collective bargaining.