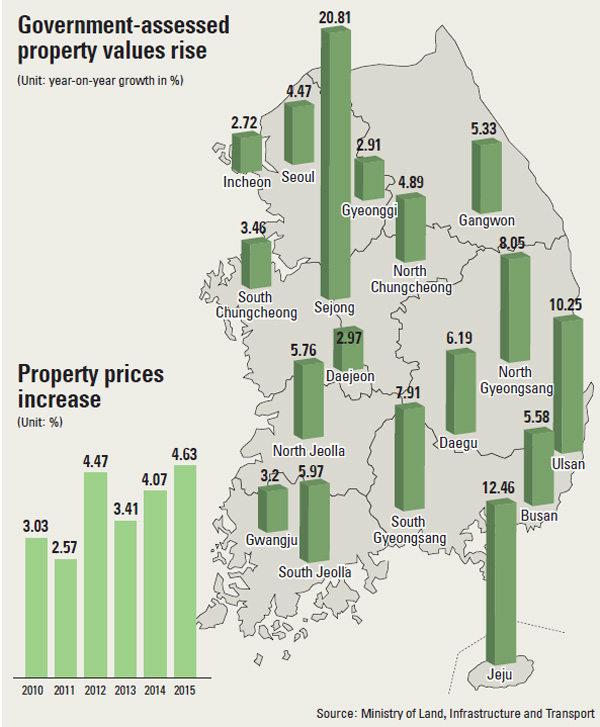 Government-assessed value on properties has gone up thanks to a revitalized market.

According to the Ministry of Land Infrastructure and Transport, assessed real estate prices have seen the sharpest rise in seven years, increasing 4.63 percent compared to a year ago.

The last time assessed property value grew at a much higher rate was in 2008, right before the global financial crisis when it increased 9.9 percent year-on-year.

This year the assessed value on real estate grew particularly sharply in the provinces rather than in the greater Seoul area.

The greater Seoul area compared to a year ago saw a 3.62 percent increase, which is lower than the nation’s average growth.

However, when excluding neighboring Gyeonggi and Incheon, property prices in Seoul reported a rise almost equivalent to the nation’s average, up 4.47 percent.

“Active development businesses in Sejeong, Uljin and Yecheon in North Gyeongsang, Yeonggwang in North Jeolla and Ulsan, have been contributing to the sharp rise in property prices,” said Park Jong-won, in the ministry’s Real Estate Evaluation Department.

In fact, the administrative city Sejong has enjoyed the sharpest growth of 20.81 percent. The ministry contributed to government relocations to the city, which helped increase the population there while adding to the local development business.

The ministry said property prices in Yecheon went up with a new city establishment plan under way.

Jeju saw its values go up 12.46 percent thanks to continuous investment from foreign businesspeople, most of whom are Chinese, and demand for low-priced houses.