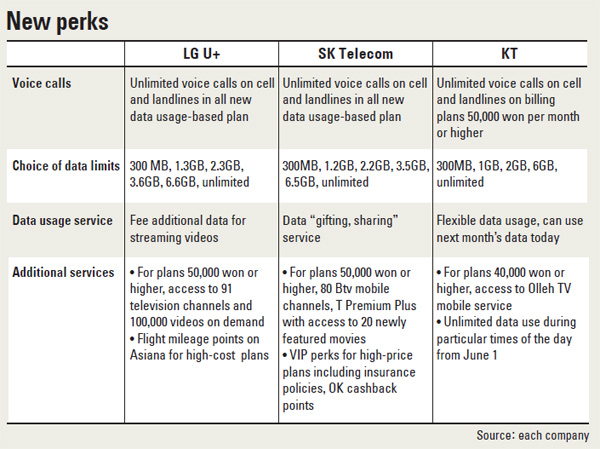 Wireless carriers have entered a second phase of competition in their new data usage-based billing plans, offering free voice calls on both landline and wireless phones, free additional data for video streaming, free access to television channels and even loyalty points that could add up to a free trip to Jeju Island.

The moves follow KT’s success in persuading subscribers to switch over to it after it pioneered the data-based billing system.

The smallest among the three carriers, LG U+, made the first move in the second round as it unveiled a new data billing plan on Thursday in which all landline and wireless voice calls are free. This is a step up from the previous plan, which charged subscribers for landline voice calls. When it first announced its new data-based billing plan, LG U+ was the only one among the three that was charging for calls made between mobile phone users and landlines. KT is exempting charges on calls between mobile and landline for users who are subscribing to monthly plans of more than 50,000 won ($45.90), while SK Telecom was giving them for free for all of its subscribers.

LG U+ had to step up its game before losing customers. LG U+ also diversified its billing plans’ data range. Previously, it offered five levels - 300 MB, 1.3 GB, 2.3 GB, 6.6 GB and unlimited access - prompting complaints that the gap between 2.3 GB and 6.6 GB was too big. The average amount of monthly data used by a Korean wireless subscriber is around 3.2 GB, according to recent data from the Ministry of Science, ICT and Future Planning. So LG U+ added a 3.6 GB tier.

Smartphone users no longer use their devices to only make calls. Many access videos from YouTube and other sources.

Over 140,000 subscribers already signed up to the previous data plan will automatically enjoy the updated perks. Those who want to switch plans can do so without penalties, according to LG U+.

And just a day after LG U+ unveiled its new plan, SK Telecom announced fresh features for its plans.

The band time free feature will be good for people who enjoy watching sports, play games and update their social networking sites on mobile platforms, according to SK Telecom.

“Band free time gives subscribers unlimited amounts of data during hours with the heaviest data traffic,” said Kim Young-seop, an executive in charge of marketing at SK Telecom in a statement.

“We will continue to offer new data usage-based billing plans that really cater to our customers’ needs.”

Meanwhile KT, which originated the data usage-based billing plan earlier this month, is working to perk up its earlier plans to match its competitors.

KT is expected to unveil a new plan next week. Some of the features that KT is expected to offer include “my time plan,” which allows subscribers on cheaper billing plans to use unlimited data during preferred hours of the day for a few extra dollars a month.