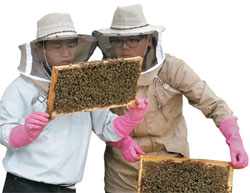 On a Tuesday morning earlier this month, several young adults in their 20s, dressed in full beekeeping suits, could be observed walking about a hill in downtown Chuncheon, Gangwon.

After one of the queen bees was found outside her hive the previous afternoon, the young beekeepers worked Tuesday to remove comb frames, the foundations upon which honeybees build their hives, to determine if any other queens were missing.

One of the beekeepers, 27-year-old Kim Na-dan, a defector from Cheongjin, North Hamgyeong Province in North Korea, explained, “When the honeybee population grows, the queen bee begins producing larvae, and most queen bees also begin leaving the hive in a phenomenon called swarming, which frequently happens in the spring.”

The hill is the location of a project known as the Beekeeping Boys and Girls, an urban beekeeping operation that’s home to 300,000 honeybees that fly in and around 10 beehives.

The operation is a joint effort by five North Korean youths from the Do Dream Academy, a vocational school in Gangwon for young defectors, and five college students from Kangwon National University’s social entrepreneurship group Enactus.

The project kicked off in November, when Enactus members reached out to the Do Dream Academy in an effort to help young defectors resettle in the South.

The organizers wanted to create a project that would facilitate long-term exchange between young North and South Koreans, so they decided upon a downtown beekeeping operation, which would also contribute to saving native honeybees that are dying out from the Sacbrood virus, which infects and kills them.

Starting an urban beekeeping project wasn’t easy. Project participants had to learn how to keep bees, as well as acquire funding.

And in March, after being selected as an official private organization sponsored by the Korea Hana Foundation, a support group for North Korean defectors, Beekeeping Boys and Girls received 4 million won ($3,650) of seed capital from the foundation.

The Chuncheon Association for Research on Beekeeping also contributed 10 beehives and 300,000 honeybees to the project.

With acacia flowers now in full bloom, Beekeeping Boys and Girls anticipates it will have its first honey harvest - when members can extract the honey from the honeycomb - later this month. The group further estimated that the harvest would yield about 15 kilograms, or 33 pounds, of honey.

But a successful beekeeping operation is just the first step for Beekeeping Boys and Girls. The group is also planning an after-school program for elementary school students.

“It’s remarkable that these young North and South Koreans were able to share the same vision and conduct this project together,” said Kim Young-woo, the chief director of the Do Dream Academy. “I hope this project has provided them with some unique experiences and boosted their self-confidence.”