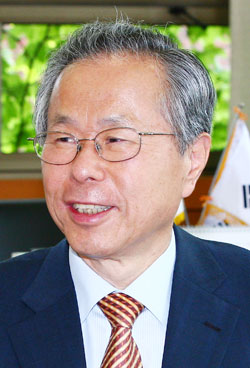 Kim, who attends Hallym University in Chuncheon, Gangwon, answered more than 400 questions on the university’s website - 70 questions each across six job categories that included social sciences, research, the arts and administration.

For questions such as, “If I am a teacher, I would like to teach practical study subjects,” students may answer yes or no.

After the test results were calculated, they showed Kim likely had an aptitude for research and office work, and that she would probably be fit for research positions or those related to survey analysis.

“I’ll consider the aptitude and personality test results I got this time to select classes for next semester,” she said.

“College students should be provided an opportunity to scientifically analyze their own career aptitudes and personal characteristics when entering college,” Ro, who took office in 2012, said in an interview with the JoongAng Ilbo on Teacher’s Day on May 15.

He added that when students understood themselves, it helped the school provide college education tailored to each student.

“These personality tests play a crucial role for a college to foster talent that employers need and eventually to boost the nation’s youth employment rate,” Ro said, emphasizing that it was even more important for regional universities like Hallym in revitalizing the regional economy and developing the area.

“While the Korean job market is getting tougher and tougher, it’s obvious that students choose a college that helps them to land a job,” he said. “That’s one of the reasons why students born and raised outside the greater Seoul area are trying so hard to go to college in Seoul.”

Losing the youth population is a greater blow for small regional cities in many aspects, Ro said, because the exodus of young people reduces both production and spending in the region.

“The role of a college comes in right there,” he continued. “Colleges based in small regional cities should get young talent to stay regionally, go to college and get jobs there by giving them positive impressions, like ‘If I graduate from this school, I can get jobs at any company here or even great-name companies based in other parts of the country.’”

This idea motivated him to seek cooperation with various companies in and outside Korea, he said.

The university currently has a cooperative relationship with some 500 companies, including Samsung Electronics and Microsoft, where about 430 students completed internships last year.

Joint research and development projects between Hallym University and these partner companies are also aimed at the niche job market, such as health care, biotechnology and medicine. Considering that Gangwon pushes medical and biotechnology industries as future growth generators, the university has continued R&D projects to develop a new health care devices and services.

Besides contributions in boosting employment rate, Ro said another significant mission of universities was to mold citizens with good personalities who can communicate and cooperate effectively with others.

Ro spent most of his career working as a civil servant and served in the 1990s as transport minister and governor of North Chungcheong.

After retiring from his job in the government, he began a second career as an educator, previously serving as president of Inha University and the dean at the Seoul Institute of the Arts.