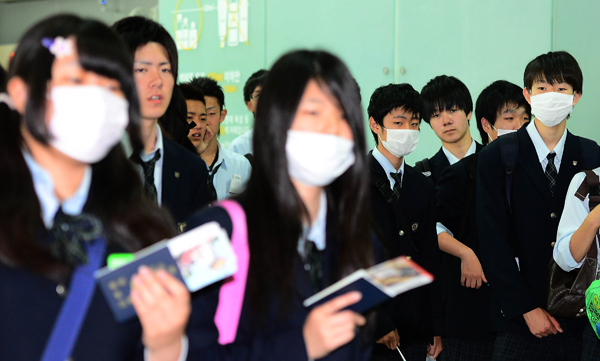 Travelers at Incheon International Airport on Friday wait in line with masks as the country marked 10 patients infected with Middle East respiratory syndrome.[NEWSIS]

The lax ways of Korea’s disease control authority now threaten China after a 44-year-old relative of two people with a potentially fatal respiratory disease was allowed to fly to China on a business trip, where he was confirmed positive for the disease Friday.

With two other people testing positive for Middle East respiratory syndrome (MERS), the total number of Korean MERS patients rose to 10 as of Friday, the highest number outside the Middle East.

“Our Chinese counterparts have informed us that the 44-year-old person who was on a business trip was confirmed to have contracted MERS,” said an official of the Ministry of Health and Welfare on Friday.

That man is Korea’s 10th patient, and he is the son of Patient No. 3, who shared a hospital ward for several hours on May 16 with Patient No. 1, a 68-year-old man who traveled to the Middle East and returned to Korea on May 4. Patient No. 1 was confirmed to be infected with MERS on May 20.

The daughter of Patient No. 3 took care of him in that hospital ward and also contracted the disease, becoming Patient No. 4. Her brother is the man who flew to China on Tuesday, even though he had a symptom of MERS, a fever of 38.4 degrees Celsius (101.1 degrees Fahrenheit). He also visited his father in the hospital. His doctor advised him to cancel his business trip, but he refused and flew to Hong Kong and then travelled to China’s Guangdong Province, where he was isolated and tested.

The Korean Centers for Disease Control and Prevention (CDC) considers Patient No. 1 to be the source of all infections in Korea. He visited four hospitals before he was diagnosed with MERS and all the other confirmed victims spent time in one of those hospitals.

The crew of the plane that carried Patient No. 10 to Hong Kong returned to Incheon Wednesday.

“We’ve figured out his itinerary and found all 38 people who had close contact with him,” a CDC official said on Friday. “But we are planning to conduct an epidemiological investigation once again to find those who possibly had contact with the 10th patient.”

“The eighth patient is a 30-year-old nurse who tested negative in the initial examination, but was found to have contracted the disease in the second examination on Thursday,” said an official of the ministry on Friday. She worked in the first hospital visited by Patient No. 1.

The ninth infected person was a 56-year-old patient in the second hospital that Patient No. 1 visited. The two men stayed in the same ward.

Two of the nine patients, No. 1 and No. 6, are known to be in relatively serious condition. They have been given intubation as they had difficulty in breathing. Patient No. 6 was treated at the fourth hospital.

“We’ve heard from medical staff that they’ve intubated the sixth patient as his condition got worse,” said the official. “It is to help patients to maintain oxygen saturation, and it doesn’t mean that they are in critical condition.”

As an effort to strengthening its monitoring of the disease, the ministry decided to take a sterner stance on medical staff not reporting the disease or potential patients refusing to be isolated.

“We had an advisory meeting with experts and agreed that we need more decisive measures to prevent the spread of MERS,” said a ministry official. “According to law, doctors who neglect their duty to report infectious disease are fined up to 2 million won [$1,800], and patients who avoid or refuse epidemiological investigation are fined the same amount, and patients who refuse being restricted to their homes are fined up to 3 million won.”

The ministry said the measures would be more strictly followed in the future.

It’s suspected that Patient No. 1 is a so-called “super-spreader,” who transmits the disease to more people than usual.

“On average, a patient is known to transmit the disease to 0.6 person,” a CDC official said. “But a recent study from Saudi Arabia says it can be spread to two to seven people.”

The possibility that the MERS coronavirus has evolved is unlikely, the CDC said.

“It takes a lot of time to compare sequences of the original virus and the recent one, so we compared only part of them,” CDC Director Yang Byung-guk said. “And they were the same.”

But experts say that’s not conclusive.

“We need to compare critical points of gene sequences, but it is impossible to see them by just comparing parts of them,” said Oh Myoung-don, a professor at Seoul University Hospital’s infectious disease division.

The government is planning to send a sample to a facility in Europe to see if the MERS virus in Korea is different from the one that killed more than 40 percent of infected patients in the Middle East.