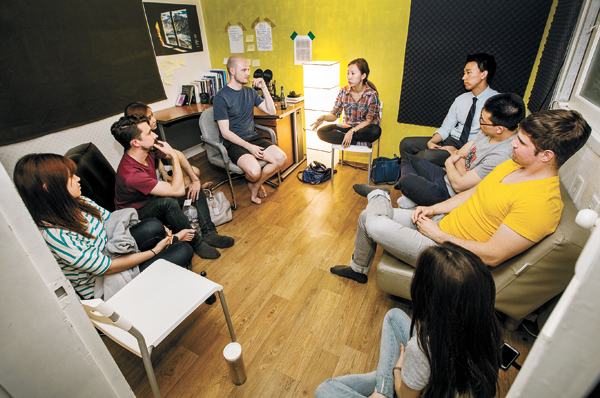 Attendees of the Seoul Honesty Group’s 70th meeting, including co-organizers Adam Talbot, fourth from left, and Colin Aulds, second from left, freely talk about their concerns at Talbot’s apartment in Haebangchon in central Seoul on Tuesday. By Park Sang-moon

“You are flirty, super flirty,” says A, talking about his first impression of B. “You seem shocked by that, which is interesting to me, and I’m curious if you flirt with everybody or just to C.”

For a first meeting, this is a quick acceleration into unsafe territory. In a usual group, the response from B could be a shrug, a rapid retreat - or a slap in the face.

But this is what you get if you attend the Seoul Honesty Group, where people are open to expressing themselves genuinely and with relentless honesty. Anything is permissible, regardless of propriety or fairness, and any topic of conversation is allowed, according to the group’s manifesto on Meetup.com.

On Tuesday, the Seoul Honesty Group held its 70th meeting at the apartment of Adam Talbot, a 27-year-old co-organizer, in Haebangchon in Yongsan District, central Seoul. At around 8 p.m., attendees gathered in front of a nearby pizza pub and moved to Talbot’s apartment up the hill.

A total of nine people, including Talbot and co-organizer Colin Aulds, 26, attended the meeting. Three of the group were foreigners and the others were Korean natives who speak English.

Since the conversations are intended to stay within the group, participants’ names have been substituted with letters to protect their privacy.

The group starts with people describing their first impressions of each other. Then the floor is open for the nine participants to bring up any concern, even ones they would hesitate to tell family members or their closest friends.

“I felt really vengeful today toward someone who previously employed me,” said D. “She did not pay me some money and I sued her, and she countersued me for 10 times the amount.

“Because I’ve never got the notification to show up at court, the judge, by default, ruled in her favor and it’s about 20 million won,” D continued. “The reason I’m so angry is because it effectively forces me out of the country because I’m not going to pay it. That ruins my future plans.”

D admitted he was not sure what he should do about the situation.

What followed the concern was a genuine piece of advice.

“My immediate thought is that it’s natural that you feel vengeful and angry because I’ve felt very vivid desires to hurt people,” said C. “But I’m very thankful I didn’t do anything about those desires because when I look back at my life, it would not have been an action I would have been proud of. You are the person who will have to take the consequences of any of your actions forever more.”

The group itself can be discussed as a topic.

E suddenly said that she felt uncomfortable in the previous meeting of the Seoul Honesty Group.

“Last time, I randomly shared one of my stories and I felt bad because one of the ladies I’ve never seen before did not respect what I was saying and said she was bored and losing interest in my story,” E confessed. “I was really embarrassed by her comment and I didn’t know what to say. I expected this group to be a safe zone for people to truly open up and a place where we are less likely to be judged.”

As soon as she finished talking, D gave his comments on E’s complaint.

“You want a place to speak honestly, then someone gives an honest comment and you feel embarrassed,” D said. “The door has to swing both ways, and the honest fact of the matter is that you are being judged as everybody here is judged, and hopefully the big difference is that we’re open about our judgments of each other.

“If you have the expectation that you are not going to be judged here and people aren’t going to give you honest feedback, it’s the wrong place because that’s exactly what people are here to do,” D added.

B, who attended the last meeting, also made a comment about E’s complaint.

“I’m happy that you brought it up because when you said to me, ‘What’s wrong with her?’ it made me think that you can probably say something bad about me behind my back,” B said.

The meeting went on for about two hours without a break. The attendees said the meeting was not boring at all and helped them be honest with not just others but also themselves.

“Here I can talk about things that I’m not typically allowed to directly bring up outside, and I can be more honest with myself when I feel anger, for example,” an attendee who gave her name as Sophia said. “I used to repress my feelings but now I just accept them and that makes everything so much better.”

“Something that has been difficult for me is being genuine and honest about feelings toward people, especially women,” said a male attendee. “On a date with a woman, I was the guy who always ended up in the friend zone. That’s not going to happen anymore because I’m completely changed.”

Co-organizer Talbot says such signs of progress are the greatest joy as he runs the club.

“Most memorable for me is when people tell me that the group has really helped them improve their relationships and their lives,” Talbot said. “We don’t offer answers to people, but often the group helps shake people out of their patterns.”

The two organizers hold two meetings a week, usually on Tuesdays and Sundays. After starting in November 2013, the group has been attended by a total of 695 people as of May 29. The meeting to be held on June 2 at Talbot’s apartment will be the 72nd. Further details can be found at the www.meetup.com/The-Seoul-Honesty-Group.

The group is also running its own blog and podcasts, which were suggested by co-organizer Aulds and can be accessed at honestliars.net. The two co-organizers appear in podcasts on various issues regarding honesty, and the most recent is titled “Virtues Seen as Vices / Vices Seen as Virtues” divided into two parts and uploaded on May 27 and May 29.